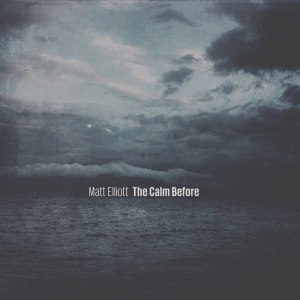 One of England’s most tormented singers returns yet again after leaving us with a heart-breaking myocardial infarction in 2013. I mean this in a figurative way of course because in real life Matt Elliott is healthy as a horse. How else could The Calm Before be his seventeenth (!) album to date. Now let’s hear what this veteran of agony brings us this time, shall we? END_OF_DOCUMENT_TOKEN_TO_BE_REPLACED

Time’s a-wasting, a saying that fits Matt Elliott well if you ask me. For starters, Elliott is the kind of musician that’s been with us for quite some time now. His track record goes back to the mid-nineties in which he was part of Linda’s Strange Vacation. In the beginning of this century he began releasing albums under his own name and was on a high in the period of his ‘Songs’ Trilogy (2004-2009). When I say time’s a-wasting, I’m also referring to the length and drawn out instrumentation of his work. Those who listen to Elliott are usually pulled into his world full of gloominess and wake from it about a hour later. I for one am just stepping out of the half light of his 2012 release, The Broken Man. However a new state of limbo already awaits me for a few weeks ago he released his sixteenth work with the tombstoner title: Only Myocardial Infarction Can Break Your Heart. On The Broken Man he promised us more pain and by the looks of it there’s no escaping it. Bring it on.
END_OF_DOCUMENT_TOKEN_TO_BE_REPLACED

Don’t judge a book by its cover. When adapting the proverb a bit can one say, don’t judge the music by its album artwork? Maybe no straightforward answer can be given to this thought. However, when I first gazed at the cover of The Broken Man by Matt Elliott I began to wonder about this. Only in the bright daylight you can barely make out three black skeletal figures against a dark brown background. My feeling was confirmed after hearing the first track ‘Oh how we fell’. Starting off with some extensive guitar play and the gloomy sounds of church bells that is followed by a soft and tormented voice. During the lengthy opening Matt Elliott immediately  takes you the depths of dreariness. After this first and relatively short introduction I can already conclude that this album isn’t for the masses. Indeed, the connoisseurs among us will enjoy this latest release of Elliott. As for me, The Broken Man significantly influenced my musical year in a positive way and is arguably the best album I heard in the past few years. END_OF_DOCUMENT_TOKEN_TO_BE_REPLACED