Let there be rock! And jazz…

Miles Davis’ Bitches Brew is one of our favorite genre bending albums of all time. It was Davis who dared to let rock-influenced arrangements into jazz music. The album eventually cemented a new genre called fusion. Fusion became a huge inspiration for musicians from other genres to experiment with. Jazz rock sprawled into other genres and, at some point, also found its way to the hard rock scene.

The use of full jazz arrangements on the harder side of the rock spectrum is not very common though. Zu or Albatre could be somewhere in that spectrum and same goes for Motorpsycho’s Roadwork vol. 2, yet none of those names quite sound like Hedvig Mollestad Trio. This trio, led by Norwegian Hedvig Mollestad Thomassen, is known for creating a unique form of hard rock-jazz. On works like All of Them Witches (2013) of Black Stabat Matters (2016) Jimmy Page, Ray Russel, Ritchie Blackmore and John McLaughlin are blended into a riffy sort of improvisational jazz. So jazzists and rockers unite! Or don’t. Just know that earlier this year Hedvig Mollestad Trio added a new work to their discography called Ding Dong. You´re Dead. And jaja, you guessed it: here is our review. 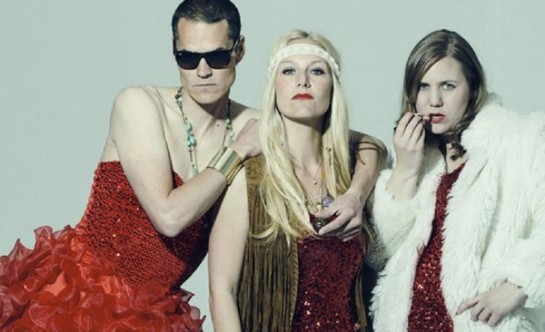 Ding Dong. You´re Dead. holds seven tracks which, on average, are six minutes a piece. For an instrumental album that is fairly compact so don’t expect any lengthy improvs. It’s all about the groove which immediately kicks in on the opener, Leo Flash’ Return to the Underworld. In the center of the groove is a pumping bass riff (Ellen Brekken) that is pushed ahead by some vicious drumming (Ivar Loe Bjørnstad). After each bass cycle it’s Hedvig’s solo’s that broadens up the song’s structure. As harmonics soar around the various cycles the track gets a jazzy feel with an unmistakable hard rock edge. The trio keeps up the pressure on the robust rocker All Flights Cancelled. Creatively the beginnings of this track is somewhat one dimensional as the straightforward riffing doesn’t seem to lead anywhere. It’s Hedvig herself who saves the day by shifting up to a spacious solo that wakes up the rest of the trio. The interplay here is just downright wonderful. The title track brings more suspense as it is calmly pieced together by Ellen Brekken’s lulling bass. It’s a close listen so you have to put in some effort to fully enjoy Bjørnstad’s pinpoint drumming and Hedvig’s resonating guitar.

The riff-heavy jazz fusion is picked up again on Gimbal which combines stoner with fractions of jazz structures. Thick and gloomy guitar lines and chromatic power-chords, it’s all there. Hereafter the trio deep dives into the true jazzy side of things on Magic Moshroom. Tight baselines, sharp broken guitar chords and metal patches gives this song a different feel from the rest. It’s a masterclass of what hard rock-jazz should all be about. On the album’s next to last track the trio showcases some highly danceable funk rock jazz. Again Brekken and Bjørnstad take the lead. Both create a strong fundament for Hedvig to make use of as she throws around crispy snare breaks and loose harmonics. Ding Dong. You´re Dead. ends with some sounds that you could relate to, indeed, death. Like the title track, Four Candles, is about the details. It’s a ghostly ballad that is softly colloured by slow jazzy chords and carefully placed percussion. Of all tracks this one is probably most forgettable if you compare it to the fireworks we heard before.

Ding Dong. You´re Dead. is a superb rendition of the capabilities of Hedvig Mollestad Trio. With this sixth studio album the trio once again displays their eccentric hard rock-jazz concept. Hard rock-jazz, and especially this sort blend could well be a connoisseur only affair. A connoisseur could rightfully wonder how this album is different from earlier releases which is a nice discussion for another time. For now we are just enjoying this niche too much so let us be. Ding Dong. You´re Dead. is one of the most vibrant releases of the first half of the year so just give it a try when you get the chance.