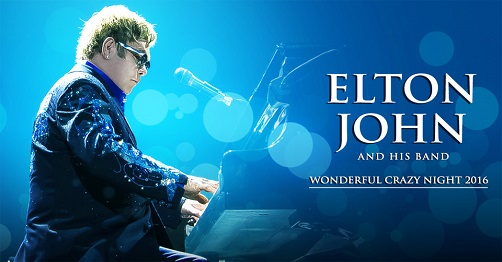 In a continuing effort to catch as many old farts live on stage as I possibly can in 2016, I bought a ticket for Elton John’s Wonderful Crazy Night Tour, and ended up having a whale of a time. Here’s what I thought.

Sir Elton John still oozes pure musicianship. At 69 years, he still knows how to throw a musical party. When the lights go down at eight o’clock on this Tuesday evening in Amsterdam’s Ziggo Dome venue and the sound of wind blowing heralds the opening song Funeral For a Friend / Love Lies Bleeding, it immediately becomes clear how it’s all about the music, all about the rock ‘n roll. No pyro’s tonight, no fancy gimmicks, nothing but a large video screen in the back (and two smaller ones on both sides of the stage), a simple but effective lighting rig, a guy behind his piano and a backing band. That’s it, and that is enough to play two-and-a-half hours of pure rock ‘n roll.

You can’t kick off a concert in better fashion than with Funeral For a Friend / Love Lies Bleeding, can you? The effervescent opening track of his 1973 album Goodbye Yellow Brick Road immediately sets the mood for the evening, and marks the beginning of a joyous celebration of music with an appropriate dearth in the Big Hit Department™. The focus lies clearly and heavily on Elton John’s work from the seventies (and arguably his best period), even though the tour bears the Wonderful Crazy Night Tour moniker, in support of his latest album. With only two (admittedly fine) songs being played tonight, Wonderful Crazy Night is blissfully unrepresented, John and his band opting to take a prolonged plunge into history instead. I could not have been happier.

With seven songs, the album that’s represented best tonight is Goodbye Yellow Brick Road, which might or might not be the man’s best album, depending where you stand, but there’s a wealth of other stuff being played tonight as well. We’re treated, for example, to a wonderful version of I Guess That’s Why They Call It The Blues (from 1983’s Too Low For Zero), with a magnificent spot for long-time guitarist Davey Johnstone to show off his skills. From 1971’s Madman In The Water we get Tiny Dancer and the amazing Levon, and Have Mercy On The Criminal (from Don’t Shoot Me I’m Only the Piano Player) is positively goosebump-inducing.

Of course, there are a few bigger hits tucked away in the set list near the end. With the crowd going crazy for I’m Still Standing and Sorry Seems To Be The Hardest Word (during which I kept wondering if these people know the original by heart, or if the huge reaction is based on the 2002 version by Blue). Another big moment, of course, is Candle In The Wind, as well as Don’t Let The Sun Go Down On Me. They’re the big crowdpleasers, saved for the end.

Performance-wise, there’s not much wrong with tonight. Sir Elton isn’t very talkative and lets the music do the talking. Not unlike PJ Harvey a few weeks ago, in fact, although he seems to have a bit more fun doing it. What is missing in the crowd interaction department, however, he and his band all but make up for when it comes to playing. The video screens and lighting is effective and manages to set the mood to each song without being in your face about it. As said, it’s all about the music tonight, and these six guys put on a powerful performance that doesn’t require any fancy gimmickry. That being said, things sag a bit at the end when we head into ballad-territory for what feels like two songs too long, until I’m Still Standing rights things again and kicks things back into gear until the band bows out with Crocodile Rock. To summarize: I’ve joked beforehand that I came to hear Funeral For a Friend / Love Lies Bleeding live, and that I would be able to leave for home happily after that. In the end, I’m glad I stayed for the ride.