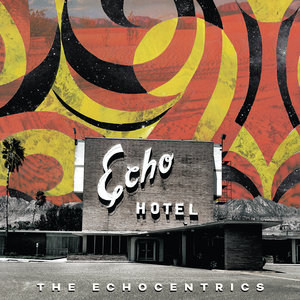 I always thought that building walls between places with a shared cultural history was a thing of the past. Guess I was wrong because new divides are rising up high again in for example the southern states of the US. Here the cultural exchange between north and south goes back for a long time and strongly echoes through in today’s society. A fine musical example of all of this comes from Austin based latin group Grupo Fantasma who in their turn laid the foundations for The Echocentrics that are under review right now.

In the centre of both bands stands the Texan Adrian Quesada who won a Grammy for Best Latin Rock album back in 2011. While Grupo Fantasma heavily leans on light hearted latin rhythms from below the southern borders, The Echocentrics’ sound is more like a cross cultural rendering of the laid back lifestyle of the American Southwest. On Echo Hotel Quesada again uses the region’s traditions as a core to build from but also dares to reach further down South by adding the vocal performances of Argentina’s Natalia Clavier and Brazil’s Tita Lima.

If I had three words to sum up Echo Hotel with, I would say it’s: unhurried, sultry and melodious. A lot that is heard on the album can be described as midtempo grooved music in which each song meanders into the directions of psychedelics, twang or tropicália. Echo Hotel’s openers ‘Canyon’, ‘Staring at the Ceiling’ (featuring guitarist James Petralli) and the instrumental title track mark the start of a surreal trip through the desert. ‘Canyon’ brings in a ‘Devendra Banhart-like’ vibe that directly makes your mind wander off to a dusty, carefully staged, alternate reality. This continues on the bluesy sitar of ‘Staring at the Ceiling’ and Echo Hotel’s hypnotizing organs.

As the album progresses the formula of mixing up psychedelics with twang seems to be the album’s main backbone. With success Adrian Quesada and Alex Maas of Black Angels create an atmosphere in which images of honor, (blood) revenge and greed are rampant. Nevertheless every now and then some other forms of bittersweetness also break trough. Especially Natalia Clavier’s compelling voice is worth mentioning here. Her vocal range of ‘Muerto en Vida’ can be smooth yet dauntless or is even hunting, as is heard on ‘Has Regresado Viejo Amigo‘. Clavier’s contribution is well thought through because it brings more depth to an already brooding production.

Unfortunately this can’t be said for the songs on which Tita Lima and Bill Callahan make an appearance. Lima’s ‘O Sol’ is first and foremost a true tropicália track. The watery guitar line, light electronica combined with her soothing voice makes me think of hot Copacabana beach. And well, that’s very different part of the world. On it’s own there is much to like about this song, it’s probably on of the best on Echo Hotel but it feels displaced here. To a lesser extent ‘Gettin’ Away With Your Gal’ also feels out of place. Indeed Callahan’s characteristic baritone voice and twang go together like cowboys and horseshoes but it’s the gimmick of desert-funk that throws in a small bit of grit in the works.

Although The Echocentrics don’t turn a new leaf in the end I have to say that Echo Hotel is a very solid album that is full of cleverly designed minuscule-soundtracks. Moreover, it shows that the cultural exchange between north and south still is alive and kicking but you know what, enough talk now, let’s just roll our eyes back and nod off to romantics of the wastelands for a while.

3 thoughts on “The Echocentrics – Echo Hotel”