Oh my, has it been thirty years already since Europe released The Final Countdown? It must be, because they’re celebrating exactly that. We went to check out the party.

First it’s up to Tax the Heat, a young and upcoming British rock band, to warm up the crowd. And it has to be said, these boys from Bristol do a more than admirable job at that. Their no-nonsense rock works like a charm, and over the course of forty minutes you can see the crowd warming to these lads. The band’s music lies in the vein of later Europe in that it’s a healthy dose of ballsy rock. There’s a bit of blues and alternative rock in the mix, and I can’t help but hear a resemblance to Kings of Leon (sans annoying vocals) in some of their stuff. Excellent performance, and a very pleasant surprise as far as support acts go. 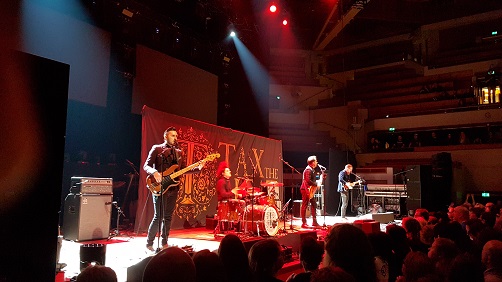 Of course, everyone has come for Europe tonight, and when the clock strikes nine, the lights in the venue go out and the band comes on after a deafeningly loud intro video teasing things to come. Turns out the band decided to marry the old with the new on this tour, and play their latest album War of Kings front to back before diving into the eighties with The Final Countdown. And as it turns out, a large part of the crowd is OK with that. This means fifty-odd minutes of new Europe material before giving the audience the songs a large number of them came out to see in the first place. A bit of a ballsy move there, but it pays off. 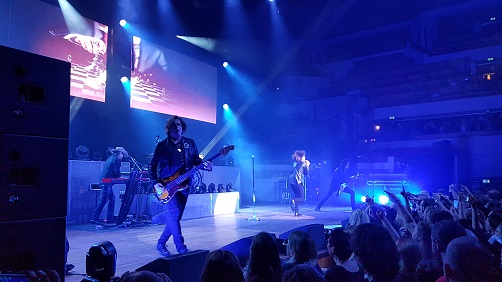 Biggest plus tonight is that the band is in absolute top form. Joey Tempest at 53 is still as excellent as he was at the height of the band’s popularity, and a very entertaining frontman to boot. There’s constant interaction with the crowd, and whenever he reaches the mic (which he’s constantly throwing about when he’s not twirling the mic stand) to the crowd, they happily sing and shout along.

I completely missed War of Kings when it came out (and sort of lost track of the band again immediately after the release of their reunion album Start from the Dark back in 2004), but I must say I was pleasantly surprised with the material. With the layers of eighties cheese stripped from their sound, Europe is an excellent melodic rock band, and the fact that the entirety of War of Kings compells live on stage without having heard the material before is a testament to the quality of the songs.

However, when the title track ends and we launch into the The Final Countdown album, there’s a sense of relief echoing through the venue. This is what most of these people have come from, and it’s the stuff Europe is best known for. And boy, do they knock it out of the park tonight. From the first notes of the title track until the end of Love Chaser, it’s a party the likes of which I haven’t much experienced at live concerts. This stuff has been ingrained in the memories of people for thirty years, a large portion of the audience knows the lyrics for songs like Carrie, Rock the Night and Cherokee by heart, and they happily sing every bit Joey asks them to sing.

The band also seems to have more fun playing these classics than they did working their way through the War of Kings material. There’s a palpable sense of exuberance during these ten more light-hearted songs, and there’s a sense of fun and positivity throughout this part of the set that was missing during the first. It’s a celebration for both the band and the fans, underscored by the barrage of photos from the The Final Countdown era being shown on two large screens behind the band, interspersed with photos from fans with assorted Europe memorabilia.

In the end, there’s no complaining when a band pulls off a show like this. Celebratory in nature, these anniversary shows are a great way for band and crowd to have a night of pure fun, and Monday evening or not, that fun was had. I doubt anyone left the venue disappointed.