We went to see Sabaton at Amsterdam’s AFAS Live venue so you didn’t have to. We also saw Accept and Twilight Force play a set and this is what we thought.

Sunday evening. Power metal night at AFAS Live (formerly known as Heineken Music Hall, although they still serve you Heineken beer, damn it). It’s drizzling outside, it’s grey and dreary  and depressing, so what’s better than two power metal bands and a heavy metal icon to play Amsterdam? Not much, I can tell you, although there are a few niggles.

The venue’s is slowly filling when Twilight Force takes the stage with their swords and sorcery type of power metal. Part Rhapsody of Fire, part Dungeons and Dragons LARP troupe, these guys play a catchy type of happy power metal with lyrics about dragons, wizards, magic and swords. Lots and lots of swords. It’s every single power metal cliché personified, and therein lies the problem; it’s so completely over the top it becomes cringeworthy. It’s Gloryhammer without the self-mockery. Still, these guys really give it their all and have to be applauded for that. 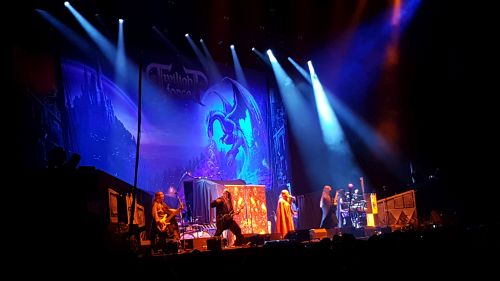 In a more ideal situation, Accept would be the headliner tonight, but instead they are relegated to playing second fiddle to Sabaton. Not that you can tell during their entire set. I have seldom seen a band, a supporting band no less, play so tight, so ferocious and so utterly convincing. From Stampede on, Wolf Hoffmann and his band absolutely own the place. It’s one hour long barrage of classic heavy metal played by a band that celebrated its fortieth birthday last year. And at 40, Accept gives many a younger band a run for their money. The set pleasantly mixes the old and the new, and it’s wonderful to see how well a song like London Leatherboys holds up next to newer material like Stampede and Stalingrad. It also bears mention how good Mark Tornillo is. The man screeches and rasps like a younger, better version of his predecessor, and delivers both the old and new material with gusto. And with classics like Princess of the Dawn, Fast as a Shark, Metal Heart and Balls to the Wall, you can’t go wrong. An absolutely inspiring performance, and surely one of my concert highlights for this year.

How do you top a set like Accept’s? Sabaton’s answer is, well, you don’t. Remember when I complained about their two intro tapes and two outro tapes? The band apparently doesn’t, because we get not one, not two, but three (!) intro tapes being played before the set starts of properly. And amongst those is Sabaton’s own version of the Status Quo hit In the Army Now. Talk about sticking feathers in your own cap. A bigger problem is the setlist itself. There’s nothing wrong with obligatory opener Ghost Division, but it gets a bit… interesting after that. The focus is strongly on newer material, with a real dirge in the classics department. Yes, we get Primo Victoria, but that’s about it. The rest of the material is almost solely from the last few albums, and although there’s nothing much wrong with those, you can’t help but wonder what happened to songs like Panzer Battalion, Attero Dominatus, 40:1 or the one-time closing staple of Metal Machine/Metal Crüe. Vocalist Joakim Brodén even admits how hard it is to keep things fresh just before launching into an acoustic version of The Final Solution, but still. 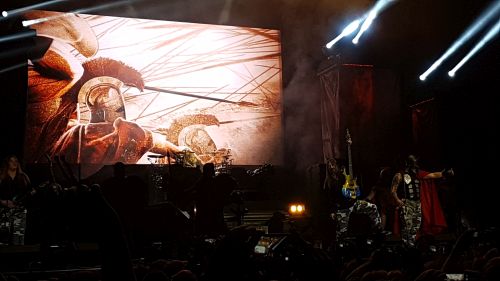 The biggest problem tonight is that Sabaton’s performance tonight comes across as routine, and that’s not something I would have thought myself saying. The banter between songs give Opeth’s Mikael Åkerfeldt a run for his money when it comes to wasting time, and that’s not even mentioning the insanely annoying and time consuming chanting of  “broek uit op je hoofd” (pants off and on your head) which sadly seems to have become an obligatory staple at Dutch concerts, where Joakim is badgered into taking off his pants and putting them on his head every, single, fucking, time. I’d have preferred a few more songs instead.

And talking about Joakim Brodén: the always amiable vocalist is not in top condition tonight. He appears tired, out of breath and just not into it, and I’m suspecting he’s caught himself a bit of the flu that’s been raging throughout mainland Europe. All in all, I’ve seen Sabaton in better shape, and I genuinely fear that this rather fun band is getting a bit too big for their own good. As my mate remarked halfway through the set, the stage is starting to outgrow the band, and that can never be a good thing. And whilst the (admittedly quite young) crowd laps it all up, this also marks the second time in a row that I’ve been disappointed by what I otherwise still think is a rather good band, and I genuinely like them enough to really not want to reach strike three. 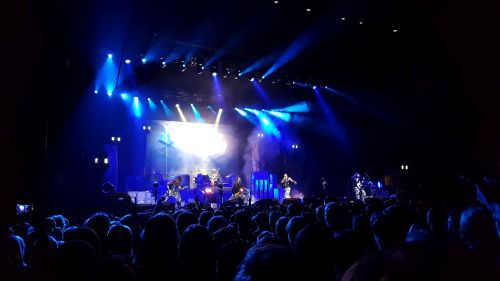