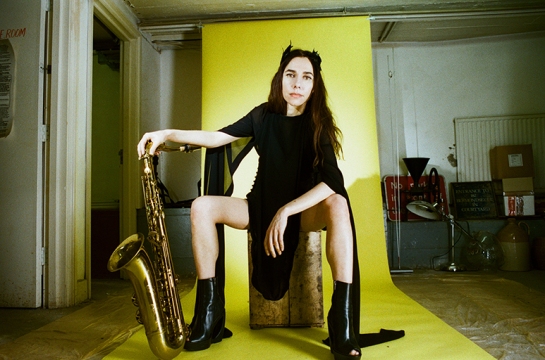 Hi there! If you have been following us around lately you might remember that PJ Harvey most recent record got a mixed review here. It’s not that we don’t like Polly Jean anymore, on the contrary, we still think she is one of the best singer-songwriters around and couldn’t be happier she touched down in Amsterdam yesterday.

During our trip to the HMH stage we shook down the mixed feelings about The Hope Six Demolition Project. Nevertheless this was replaced by other similar doubts when we checked the announcement of the tour on Harvey’s website. It spoke superlatively of a powerful, joyous and provoking festival-like show. Well, sure that’s nice if it wasn’t for event organizer MOJO’s up front e-mail in which they stated that Harvey aimed to play for a meager 90 minutes that night. That doesn’t seem to add up, does it? So indeed some mixed feelings were still there, but hey, we still like Polly Jean, no matter what.

15 minutes later than planned the 47 year old PJ Harvey marched on the stage with a 9 member strong band of session musicians. Although we know Harvey could easily do with less, for example on White Chalk (2007), she has the clear goal tonight tackle some harsh world problems head-on. With some projected brickwork at the background the show kicks in with some ominous military drumming which serves as a lead in for the show burst of horns of ‘Chain Of Keys’. Harvey immediately shows her voice is in good form after playing several gigs elsewhere in Europe last week. Strong and persuasively she grips the audience attention and addresses the desolation of the former Kosovo war zone which is stepped up by the guitar shredding, downright harsh lyrical imagery of ‘Ministry Of Defence’. The reaction of the 40-something crowd was somehow apathetic but nevertheless Harvey carried on playing songs from The Hope Six which eventually made people around us yawn for brief moments.

Luckily a small cluster of songs from Let England Shake (2011) brought some relief although the almost mandatory hand clapping of the band in ‘The Words That Maketh Murder’ never echoed through in the audience. ‘This Glorious Land’s’ uplifting watery guitars seemed to break the set in two for the better, yet instead the band returned the jazz-rock routines of The Hope Six and added White Chalk two songs along the way. Songs such as Dollar, Dollar, with the backdrop sounds of Afghan street life, the blues-free jazz underpinnings of ‘Ministry of Social’ and ghostly undertones of ‘The Devil’ are executed swiftly by the band that included longtime collaborators Mick Harvey and John Parish.

To the band’s satisfaction the show flawlessly proceeded but also never gripped the attention of the audience. Until after about 70 minutes Harvey suddenly broke loose with the 90’s punk-rock song ‘50 ft Queenie’. With her short skirt, feather cap and a familiar high-pitched voice she restlessly walked the stage and finally got everybody’s hands together. Hereafter the now monumental songs ‘Down by the Water’ and ‘To Bring You My Love’ were welcomed warmly. With slow Flamenco-like arm movements Harvey gloomy moved around the stage. Her razor sharp voice sung about the chilling story of a downed child and the many faced traps that desire and made a dark autumn cover the venue. Alas the enthusiasm was short lived because it also heralded the end of the show and thus a single track return to context of injustice from The Hope Six.

And then Polly Jean does, to her and the show’s detriment, what seems to be the norm at every rock show these days, and leaves the stage for the mandatory three minutes, allowing the crowd to cheer on whilst the lights remain dimmed. There will be an encore. There have been encores throughout the tour, and there will be one tonight. If you’re going to play two more songs by all means, play them, and stop wasting our time. Especially if one of these isn’t too good. ‘The River’, from 1998’s Is This Desire? is a welcome addition to tonight’s set list, but ‘The Last Living Rose’ perhaps isn’t the best way to end a concert. It causes the gig to peter out instead of going out with a bang.

Despite the weak ending it was truly nice to see PJ Harvey perform with a well-rounded band like this. Nevertheless we were left with the feeling that we were stuck with a full The Hope Six package. In the 90 to a 100 minutes it took the show to complete we mostly listen to songs of her latest album which is not bad and gives us an important message about the dealings of humanity but doesn’t really add something new to her catalogue. Therefore it is regrettable she didn’t brought more balance between her older and newer work, especially with all that sound on stage.