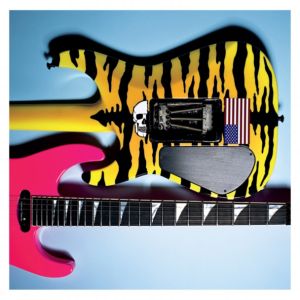 Earlier this week I fell asleep to the soothing voice of Bill Callahan… BUT WOKE UP TO THE AGGRESSIVE BEATS FROM THE NOISE POP BAND SLEIGH BELLS the next morning… I sighed deeply for a moment yet quickly was reminded of the fact that I still enjoy the debut of Sleigh Bells, Treats (2010). What I love about Treats is its intensive rawness, coming from mind blowing disordered riffs, hardcore beats and electro, and the interweaved feminine cuteness. I mean, ´Straight A´s´, ´Run To The Heart´ and the Diplo remix of ´Demons´ are just top-notch. At the time Sleigh Bells seemed to be a sort of wildcard in the indie scene, defying all kinds of conventions and taking the freedom to stir up some trouble. The simple and direct pounding continued on their sophomore album Reign of Terror in 2012. Vocalist Alexis Krauss and guitarist Derek Edward Miller described the latter as “the sonic equivalent of a beautiful shotgun to the head”. Thats not a bad comparison, apart from the fact that Reign of Terror was also groomed to attract a larger audience. Whilst the album did reach a number 12 spot in the Billboard 200 in its opening week, it plummeted to number 78 in the second week and was completely forgotten in the weeks that followed. Maybe people just don’t like to buy music with shotguns to their heads, hmm?

Regardless to this, Sleigh Bells is not the band that takes a knee that easily. Bitter Rivals, that was released at the start of this month, is a new and bold attempt to push their concept of likable noise to a more profitable platform. Its certainly true that a fresh change could be beneficial to the world of contemporary pop music. Sleigh Bells deserves some credit in advance for trying, and lets be honest, the cover art looks promising. However when it comes to the content, Sleigh Bells fails to make a difference on Bitter Rivals and more importantly, leaves behind a spasmodically nondescript impression.

Bitter Rivals´ opening is explosive. During the title track an easy strumming guitar is blown away with the familiar hardcore beats, power chords and ripping synts we know from Treats. So thats a good thing. However the title track also is a symbol for the rest of the album because, strikingly, each the time the chorus sets in the wall of noise suddenly stops breaking the song into pieces. ´Sugarcane´ and specifically ´Minnie´ follow this same line of arrangement. Be that as it may, Sleigh Bells still is energetic as ever. The essential turning point on the record comes with ´Sing Like a Wire´ thats a compulsory assembled track and musically reminds of the fierce hardcore of the Atari Teenage Riot and vocally refers to the ´chewing gum pop´ of Annie. This hardcore pop structure seems amusing but is in fact misleading. On ´Young Legends´ this becomes painfully clear for a definitive turn towards ´chewing gum pop´ is made by Sleigh Bells. Obviously from here the album becomes a disappointment, at least to my humble opinion. ´You Don´t Get Me Twice´, ´To Hell With You´ and ´24´ can easily compete in the charts with lesser loud pop acts like Girls Aloud, Katy Perry, Kelly Rowland and Rihanna. My elitist heart slightly starts beating again after hearing the first battering beats on the closer `Love Sick´. Will Bitter Rivals at least least get a proper closing? Alas, the track unfolds to be another disappointment when hearing the displaced and boring chorus.

In the attempt to expand their fame Sleigh Bells makes use of an interesting tactic. Instead of valorizing their creativity as heard on the previous albums, Krauss and Miller choose the partly abandon it. This is especially heard on the second part of Bitter Rivals, which is a sheer standardisation to hit parade pop. Who knows if this tactic plays out well for the band. Regrettably I have to conclude that the thrill is gone on this new Sleigh Bells album. At least still thrill is to be found at Treats. So surely it´s too soon to speak of a downfall or argue that the wild oats are already sowed for Sleigh Bells. An interesting creative potential is still there waiting to be unleashed on a future release. Yet and again a deep sigh seems into place though.