We take a long hard look at Nightwish’s new opus and come away not entirely convinced.

The pretentiousness and pomposity of calling an album Hvman. :II: Natvre. somehow greatly annoys me. “Look at this monumentally important thing that we have created right here,” it seems to say with a self-congratulatory smugness. The ludicrous album title, the partnership with the World Land Trust and the fact that band mastermind Tuomas Holopainen somehow thought it was a good idea to make this a double album, with the second disc consisting of an eight piece orchestral suite called All the Works of Nature Which Adorn the World all point to one possible conclusion: things are going to get preachy here, and probably not in a good way. If you thought the last album’s 24-minute closer The Greatest Show on Earth, with its Richard Dawkins speech was overbearing, you are in for a treat here.

Before we even touch on the second disc, there’s a “normal” album with nine proper songs to deal with first, and I’m glad to say that as a single album it’s mostly fine, if a bit flat and unadventurous. Music immediately sets off on the wrong foot with over two minutes of tribal noises before starting the album properly with a serviceable but less than stellar opening track. Noise fares better in that respect. Even though it leans heavily on the musical motif of the Game of Thrones intro, it’s a bombastic and heavy rocker that has vocalist Floor Jansen in particular firing on all cylinders. Shoemaker is fine for what it is, a mid-tempo song with a vocal line that doesn’t quite know where it’s going for the entirety of five minutes, but ends on a goosebump-inducing high note with Floor being able to show off her opera chops. 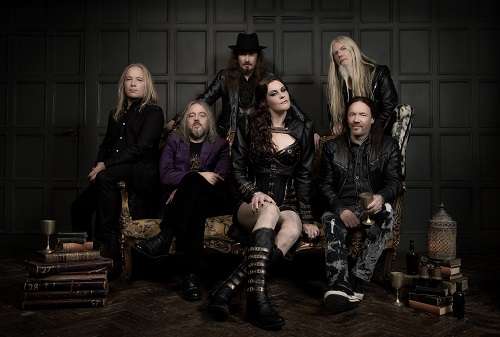 The first real surprise comes in the form of Harvest, which has Troy Donockley on lead vocals and merrily Uilleann piping his way through what starts out as a leftover song from the Lion King writing table and ends in a wonderful folk-y rocker. It’s brilliant and I’d gladly pay money for an entire record like it. Pan has a more up-tempo metal approach even if Holopainen fails to resist the urge to throw in some Danny Elfman type creepy choirs in there about halfway that make things more excessive than necessary. The next real highlight is How’s the Heart? which brings back the folk and the light-hearted fun, even though I can’t help but hear Floor singing Hamster Heart instead. You’re welcome. Procession is one of those Nightwish songs that’s just there and really doesn’t do much. It’s not bad but also not really good and for some reason every album these guys release these days needs to contain at least one of them. Tribal, then, is another highlight that is ridiculously heavy on percussion and really taps into Floor’s aggressive side with some searing vocal lines and crazy tribal chanting about halfway through. Disc one ends with Endlessness, with Marco Hietala on lead vocals. Clocking in at seven minutes it sadly only gets interesting (and quite mesmerising) halfway in.

So in fifty minutes, Nightwish has delivered a perfectly fine album with nine songs of varying quality. The song writing is a bit over the place in terms of consistency but as a whole it’s enjoyable enough to warrant repeated plays. But since Tuomas Holopainen somehow didn’t have his head in his arse far enough already, we’re treated to a thirty minute second disk with one eight song counting instrumental suite called All the Works of Nature Which Adorn the World. And if you think that sounds utterly pretentious it’s because it is just that. Also, if you read that title, see that the entire thing lasts thirty minutes and expect a neo-classical, orchestral, self-congratulatory wank-fest: that’s exactly what you’re getting. This is the work of a keyboardist from a rock band being so enamoured with himself, being so rigid in his belief that he’s the next great movie composer that for some insane reason we need to be treated to thirty minutes of it. In the end, what we get is half an hour of orchestral background music with perhaps one or two small moments that make you sit up and take notice. It’s music that would work perfectly fine when accompanied with some wonderful footage from a nature documentary. You can almost hear David Attenborough talking over it (which actually was the initial plan, apparently). As it is presented here, it falls flat and does nothing at all with the sole exception of the two minutes of Aurorae and the climax in Ad Astra. All the Works of Nature Which Adorn the World is just there. It just sits there on the tail end of an okay album and does absolutely nothing.

If I sound annoyed it’s because I am, and it’s because Nightwish can do better than nine good to ok-ish songs and an instrumental suite that does nothing. Here is a band with a powerhouse vocalist and they continue to give her nothing to do. Remember that huge fucking finale to Ghost Love Score everyone and their mum raved about when they released the Floor Jansen version of that? Hvman. :II: Natvre. will be having none of that thank you very much. Remember when Emppu Vuorinen could actually play guitar and spiced up the material with all sorts of wondrous solos, riffs and licks? Hvman. :II: Natvre. seems to rather want to forget about that. And of course, when I say Hvman. :II: Natvre. I actually mean Tuomas Holopainen, the man who once wrote an instrumental album about Scrooge McDuck and who seems to increasingly buy into his own delusion that he’s a Composer™ like John Williams or Hans Zimmer when he clearly isn’t. I sincerely hope that this was in the end some sort of thing he had to get out of his system, but as each Nightwish record turns out more bland when it comes to actual songs and the orchestral bloat keeps increasing I’m afraid we’ll be in quadruple album territory before it ends, with two of those having to be played simultaneously for full effect.