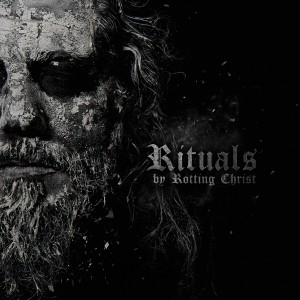 A neat three years after Κατά Τον Δαίμονα Εαυτού, Rotting Christ return to the fray with a new collection of not-really-black-metal-anymore. It’s a collection of ten great songs, but it’s not for everyone.

When I reviewed Κατά Τον Δαίμονα Εαυτού back in 2013, I called it the most eclectic album the band had ever put out. Well, the Tolis brothers have apparently found a way to one-up the eclecticism on Rituals, which is impressive in itself. Over the course of ten songs, Rotting Christ continues to explore the boundaries of black metal with a heap of different cultural influences, outlandish instrumentalism and an increasing sense of occultism. I guess the album isn’t called Rituals without reason.

You can say that Rotting Christ has been gradually becoming less metal, but they’re simultaneously becoming a lot more interesting with age. On Rituals, they offer songs sung in Greek, French, Aramaic (!), English and Sanskrit (!!), and a multitude of musical influences from around the globe, whilst the lyrics are based on a number of literary and/or historical writings. Along the way, we touch on the works of Baudelaire (Les Litanies De Satan (Les Fleurs Du Mal)), Euripides (Ἐλθὲ Κύριε), The Bible (זה נגמר), William Blake (For A Voice Like Thunder) and Aleister Crowley (Konx Om Pax), all set to ominous riffing, swelling keyboards and featuring a host of guest vocalists, amongst which we find illuster names like Nick Holmes (Paradise Lost) and Vorph (Samael).

Now, that’s quite a list of names and influences, but how does that translate into music? The answer to that question is, luckily, “quite good.” Rituals is a logical successor to Κατά Τον Δαίμονα Εαυτού. A bit too logical at times, as the band tends to retread familiar ground a little too often on a couple of songs. There are a number of riffs and melodies on Rituals that sound very familiar if you have heard any of the band’s last few albums (think Theogonia and onwards). The music is consistently good, so perhaps we shouldn’t complain, but the band has to be careful to not repeat themselves too often.

Considering the cultural and literal cherry-picking the Tolis brothers have done, it should not come as a surprise that Rituals is a more varied album than its predecessor. In Nomine Dei Nostri sets the tone for what is a mostly mid-tempo ride. It features a slew of the typical staccato riffing you’ve come to expect from Sakis Tolis, over which roll the blast beats of his brother Themis. There are dark incantations on In Nomine Dei Nostri, frantic screaming on Ἐλθὲ Κύριε (courtesy of Danai Katsameni from the National Hellenic Theater on which is undoubtedly the best song on the entire album) and more incantations on the percussion-heavy Ἄπαγε Σατανά. To hear Rotting Christ in French though, is slightly weird, and to this day I’m still not quite sure how I feel about Les Litanies De Satan.

Rituals is, as were the few albums before this, a hypnotising record. The band drones on for fifty minutes and is able to transport the listener to different times and places. देवदेवं, especially, really gives you the idea of something authentically Indian, whilst זה נגמר transports you back to the days of the crucifixion of Jesus of Nazareth through its lyrics in Aramaic, focusing on the last seven sentences Jesus uttered at Golgotha. Special mention goes to the very strong For A Voice Like Thunder, a mesmerising rendition of William Blake’s poem, and the brilliant move to cover Aphrodite’s Child’s The Four Horsemen (from their 1972 666 double album). It’s a great hommage to the legendary Greek progressive rock act.

More diverse than Κατά Τον Δαίμονα Εαυτού, Rituals is proof that Rotting Christ is able to infuse just about any and every cultural influence or instrument into their music and still come out with captivating stuff whilst retaining their own distinctive sound. That diversity also helps in keeping things interesting for both newcomers and older fans, because even though Sakis comes dangerously close to ripping off his own tunes sometimes, there is still enough to discover and enjoy on this thirteenth Rotting Christ record.