Black metal on a Saturday night in Utrecht’s De Helling? Don’t mind if we do. Greece’s Rotting Christ headlining? All the more reason to make the trip on a very dreary January evening. Here’s what we thought.

France’s Svart Crown has the honour of kicking off the evening, and they do so with gusto. I hadn’t heard the band live before, but they do an admirable job of warming up the crowd with their no-nonsense approach to melodic death metal. You can see how this trio would end up on a bill with Rotting Christ. The Frenchmen have the same steamroller approach to playing, with nary a word between songs and letting the music hit the audience at full force. A pleasant surprise in a world where support acts more often than not disappoint.

Carach Angren from the Netherlands is next, and the venue is already tightly packed with people waiting to see the Dutch black metal band at work. And these guys know their stuff, the music taking its cues from bands like (early) Satyricon, Dimmu Borgir and Anorexia Nervosa. It’s very nineties black metal with a layer of horror, and having seen them live a few years ago, I was pleasantly surprised at how much tighter these guys have become since then. From the opener Charlie, the band is on fire, and I frequently had to remind myself that this was not the main act this evening. Vocalist Seregor swerves all over the podium like a wraith, whilst Ardek is conjuring up tricks behind his semi-floating keyboard. Carach Angren is a joy to look at and a formidable force on the stage, throwing songs like In De Naam Van De Duivel and Bitte Tötet Mich at the audience like it’s nothing. And the audience laps it up eagerly. Had I not been waiting for Rotting Christ, this would surely have been the highlight of my evening. 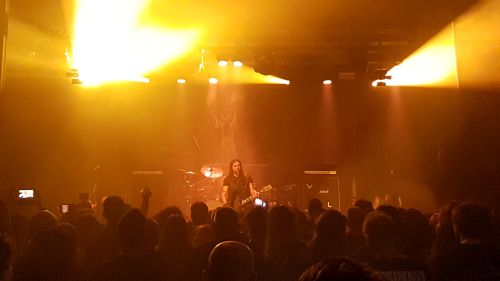 I’ve been following Rotting Christ ever since 1999’s Sleep of the Angels, and whilst they have released some lesser gems after that, they’ve been on an absolute roll since 2007’s Theogonia, fully embracing their black metal sound and their Greek heritage again and honing it into something quite unique. Apparently I’m not the only one tonight who seems to think so, because from the moment the band comes on and starts with 666, the audience goes into overdrive. The Tolis brothers and their companions march their way through over an hour of mesmerising black metal and have no problem at all in getting the crowd to join them in headbanging and shouting along. The focus is firmly on newer material tonight, with Non Serviam and the Thou Art Lord song Societas Satanas being the oldest songs played.

Material like Demonon Vrosis, Grandis Spiritus Diavolos drone on, however, creating an almost hypnotising atmosphere, unrelentlessly grabbing you by the balls and not letting go until the gig is over. A pleasant surprise between all the mayhem is the percussion-driven Apage Satana from their last album Rituals, which sounds a lot more tense live than on the record. From the same album comes Elthe Kyrie, a song I would have thought too chaotic for a live performance, but it works quite well. It helps that the sound is quite alright tonight (and has been for the entire evening, really), so you can really pick out the details in what really is an enormously frantic song. The only complaint I have about an otherwise great concert is that just over an hour’s worth of time is far too short for a diverse band as Rotting Christ, but it’s a small stain on a fine evening of metal. It’s been a long time since I saw not one but actually three great bands in succession, and putting Carach Angren right between Svart Crown and Rotting Christ really helps in mixing things up to keep the evening interesting. More of these sort of metal nights, please!