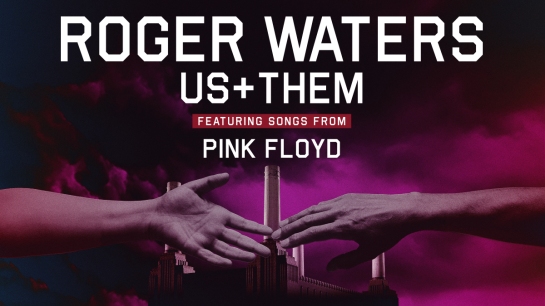 Last time we saw Roger Waters live, he was still doing his live rendition of The Wall. A lot has happened since then. We were treated to a documentary film of that tour and an accompanying live album, a remastered re-release of Amused To Death and, finally, a brand new album twenty-five years in the making. Waters also hit the road again with his Us + Them Tour, with which he finally hit The Netherlands for a four-evening stint.

We were promised a “pretty cool show” with about 75% Pink Floyd material and 25% worth of other stuff, and that’s exactly what we got this Tuesday. Of course, the entire show is, once again, also a vehicle for Waters to express his political views, and starting the evening with an almost agonisingly long video of a woman in a hijab sitting on a beach is absolutely typical of him. You know there’s a message in there somewhere, but we’re not quite sure what it is yet. Finally, the clear skies on the screen turn blood red and the camera zooms out to reveal a barren land on a big, black sphere which might or might not be intended to represent our own planet. Cue Speak to Me and Breathe from Floyd’s seminal The Dark Side of the Moon (which, bar On the Run and Any Colour You Like, is being played in its entirety over the course of the evening).

Waters chooses his imagery carefully, and watching the floating sphere juxtaposed upon videos of still waters, racing traffic and London, you can’t help but admire the artistry of it all. There’s a cohesion to Waters’ work, conceptually, lyrically and musically, and you have to wonder how much of what you see here and over the years is pure Roger Waters instead of the work of a fully functioning band or a team of concept artists (Storm Thorgerson and Hipnosis first and foremost). The eerie, ruin-like doors and windows on One of These Days, the floating clocks on Time, it’s all classic Floyd, and a masterful display of how you successfully marry image and sound. We were less enamoured of tonight’s rendition of The Great Gig in the Sky, though. Jess Wolfe and Holly Laessig are excellent vocalists, but after hearing what David Gilmour did with the song on the Live at Pompeii live album last year it’s hard to go back. 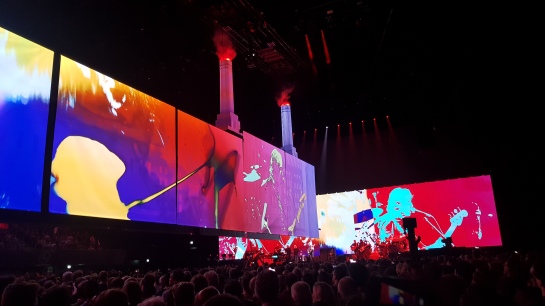 The first non-Dark Side song is the ever ominous Welcome to the Machine, with the classic, animated music video displayed on the screen behind it. After that, we take our first plunge into Waters’ solo material with Déjà Vu. It’s also here that things get political, sometimes overtly so. Waters hammers on about the Israelian/Palestinian conflict, refugees and overall state of things on The Last Refugee (which is linked to the video at the start of the show) and the energetic Picture That before we’re treated to Wish You Were Here. The first part of the set ends with three songs from The Wall; The Happiest Days of Our Lives leading into the second and third part of Another Brick in the Wall. The school kids we’ve seen on the Wall tour are back, but this time clad in orange jumpsuits and with black hoods over their heads, immediately conjuring images of detention camps like the one in Guantanamo Bay. The imagery is lugubrious and sent shivers down our spines before the hoods are thrown off and the kids clap and shout along. Powerful, powerful stuff. The activist Waters calls for resistance against all the corrupt governments that spread division among the people. During the interlude thoughts and facts about this resistance are displayed on the main screen. Waters message is clear-cut: it’s time to act collectively. 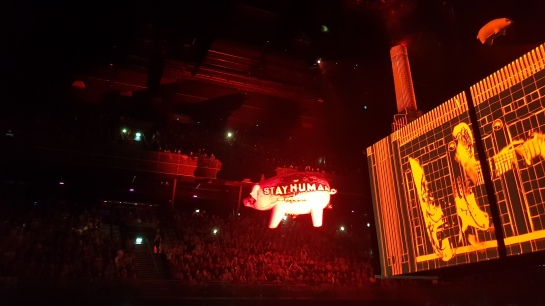 The second set starts off in grand fashion with Dogs, at the start of which the massive Battersea Power Station from the cover of Animals is being pulled up in the middle of the venue, effectively dividing the audience in two. While a drone-flown pig hovers overhead that proclaims: “Stay human or die!”, Dogs kicks in. Dogs, of course, is a thing of beauty in its complete, seventeen-minute glory, and the interlude in the middle where Waters and his band hang about drinking champagne with pigs masks on whilst egging on the crowd is wonderfully creepy. Here the show turns into an anti-Trump manifestation with projections images of Trump mocking him in every possible way. Pigs (Three Different Ones) follows before we’re back into Dark Side territory with the obligatory Money and Us and Them, which is supported with images of various unjust events from around the globe. The regular show closes with a massive, almost divine, display of the The Dark Side of the Moon prism and the tracks Brain Damage and Eclipse, before we get two encores in the form of Mother and, of course, Comfortably Numb. Pink notes with the word “Resist”on it rain down on the audience telling us to stand up to all inhumanly acts in the world. The momentum couldn’t be better because at the exacted time Waters delivered his message in The Netherlands on the other side of the world the US announced its withdrawal from the United Nations’ human rights council. At the very of the show end the woman at the beach returned on the big screen, here she continues here restless wait for reunification, peace and someone to help her to make sense of it al.

The Us + Them tour is testament to the huge legacy of Pink Floyd and gives us a Roger Waters who, at 74, still refuses to slow down. It’s a feast for the senses and, for some, perhaps food for thought. At any rate, just like The Wall before it, this is a rock show you have to witness for yourself at least once in your life.