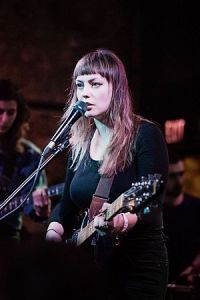 What do Stockholm, Paris, Los Angeles, Glasgow and Utrecht have in common? Well, all cities were recently visited by the graceful singer-songwriter Angel Olsen. Olsen released her sophomore LP, Burn Your Fire For No Witness, this February and has been on tour ever since, playing night, after night, after night. The EKKO stage in Utrecht (The Netherlands) was the next in line for Olsen. And since the album made it to our ‘not to be missed in 2014’ section, a visit to this gig just couldn’t be resisted.

In a sold out EKKO the show was kicked off by Rodrigo Amarante. Amarante is known for his work with Devendra Banhart and Little Joy and now tours with Olsen to promote his first solo LP, Cavalo (2014). Although Cavalo is a fresh piece of work, Amarante’s show was contained an obvious set of intimate Portuguese songs that we’ve seen and heard it all before in different sizes, shapes and formations. Even Amarante openly wondered why nobody walked out of the concert room… So he said with a smile of his face and knowing he got some full exposure for his new LP. After this it was Olsen’s turn to hit the stage.

Alas, Olsen and her supporting band started the gig in wavering manner. A few of songs from the aforementioned album were dutifully played and the bittersweet atmosphere of the studio versions of ‘Forgive/Forgotten’, ‘Hi-Five’, ‘Stars’ was not reflected on stage. Perhaps this is not very surprising if you take in account the band is currently performing in a murderous pace since February. A more important issue was bad sound quality during the beginning of the concert. The ratio between band and vocals seemed to be completely off. Olsen’s vocals regularly fell to the background and it took the sound engineers some time to restore the balance. Around that time Angel Olsen also addressed the hipster audience for the first time asking about the city of Utrecht and made some remarks about the heat on stage. In the sweltering heat however the midsection of the show was very comforting. The hypnotic version of Acrobat, from Olsen’s debut in 2012, finally gave way to Olsen’s marvelous voice placing her centre stage. Hereafter songs from the Burn Your Fire album were again predominant. ‘High & Wild’, ‘Iota’ and ‘Slow Dance Decade’ were given the attention that it deserves and upholded Olsen’s image of being fragile and powerful at the same time. Between various songs it became clear the heat was becoming a bit of a burden, ‘Let’s have some tequila guys and jump into the canal in front of here!’, she stated, which was directly followed the swampy guitar play of ‘Sweet Dreams’. From this point on Olsen was keen to lead out the concert in an appeasing way. Firstly Fleetwood Mac’s, Dreams was played out in a nice yet tame manner. After this the band left the stage. Olsen’s stripped down version of ‘White Fire’ stranded halfway for reasons unknown. Was it the heat? Was it an upcoming dance party? Anyway, after she apologized, ‘…let’s unfuck this’, she ended the show with an elegant version of of ‘Unfucktheworld’

When all things are considered, I have to conclude that Angel Olsen did not experienced an easy evening in Utrecht. Understandably the heavy touring schedule left a mark on the band’s fatigue. Also the technical sound alignment in the beginning and the heat during the concert wasn’t very helpful as well. Nevertheless, the band made the best of it and Olsen’s voice seemingly was not affected. That a good thing on it’s own. Yet, on a different level one could question if a live act like this suits Olsen best. On more than a few occasions Olsen had to hold back, giving the impression she was supporting the band and not the other way around. Musically speaking the show therefore was not very exciting. Regrettably the high standards I expected beforehand were therefore not redeemed and sometimes even fell into phases of mediocrity.