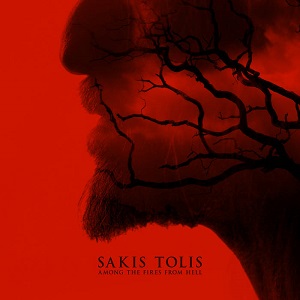 When Rotting Christ frontman Sakis Tolis announced he would release a solo album, my first response was lukewarm. After all, while I enjoyed the band’s last few albums, they also sounded a bit too similar. The same riffs, licks and solos were being recycled over and over, resulting in material that sounded too familiar. Sometimes this repetition would occur on different songs on the same album (I’m looking at you, The Heretics). As much as I love this band, there’s a tipping point where things become tedious. Luckily, Among the Fires of Hell is miles apart from the band’s latter era, barbaric chugging approach and more of a return to the more gothic sound found on the albums before 2007’s Theogonia.

The promise of a gothic-tinged Rotting Christ­-lite is an enticing one, and Tolis absolutely delivers on Among the Fires of Hell. He has handled all vocals, instruments and the production himself, and whilst it never sounds miles apart from his main band, the album is different enough to captivate even the most burnt-out fans. The album, consisting of nine songs, is remarkably bite-sized with only two songs exceeding the five-minute mark. Fans of the more harsh, frantic side of Rotting Christ will find nothing for them here; Among the Fires of Hell is paced mid-tempo all throughout its forty-minute runtime. What it lacks in speed, however, it more than makes up when it comes to atmosphere and melody.

Opening songs My Salvation and the title track immediately drive home that this one harks back to the past in the songwriting department. There’s more emphasis on melody and keyboards are a prominent feature in the mix. Riffs chug along as they always do, but there is more detail and accentuation in the guitar solos, which regularly soar up to high heaven. On vocals, Tolis alternates the black metal rasps with morose clean vocals and chanting, adding even more to the gothic atmosphere. There is material here that could easily have been on A Dead Poem (1997) or Sleep of the Angels (1999), perfectly encapsulating the vibe of that era without sounding old-fashioned.

Highlights on Among the Fires of Hell are The Dawn of a New Age, which includes Stephen Hawking’s infamous “there is no God” quote, Ad Astra and I Name You Under Our Cult with its mesmerising chat’s of “Apollyon!”, but that’s not to say the other songs are bad at all. If there is one piece of criticism you could lob at Tolis’ solo album is that the patented familiarity on certain riffs and solos does crop up now and then, just like with Rotting Christ. Then again, what else do we expect by now? Sakis Tolis does what he does and does it the way he does, and after The Heretics this solo album feels like a bit of fresh air in between the black Hellenic pummeling. I can only hope Among the Fires of Hell opens the gates for a slight course direction for the man’s main band, but only time will tell.