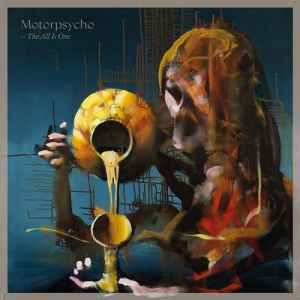 Norway’s most famous alt rock institute is back to end a trilogy that was never really a trilogy. Confused? Excellent…

We completely understand that people are fed up with Motorpsycho. The All Is One is studio album number 22 so you would say that enough is enough now. Well, of course that doesn’t apply to us. Instead we always warmly welcome any new Motorpsycho release because after 30 years Motorpsycho still remains a band that is eager to keep pushing forward their own quality standards.

Before The All Is One was released the band lighty stated that their 22th was the ending of the Gullvåg trilogy. In a way this came as a surprise because musically predecessors The Tower (2017) and The Crucible (2019) we’re never marketed as a part of a larger whole. Visually the band has got a point because the artwork of these albums was made by painter Håkon Gullvåg. Gullvåg shows off his skills for the last time on The All Is One making it an ending of a visual trilogy.

The All Is One was cut in two separate recording sessions that were squeezed in between last year’s The Crucible tour. One session took place in France and the other one in Norway. Both sessions resulted in two very different forms of rock music. Sæther et al could easily release two albums but instead they wanted a trilogy so they decided to piece together one long album containing work from both sessions.

We therefore decided to review this surprising trilogy ending by means of our first three spins which we did on separate days. Hopes, doubts, joy, we’ve experienced it all when playing The All Is One. So welcome to our schizophrenic little world of album reviewing.

First spin: Of course the first notes of an highly anticipated album like this can only disappoint. The eponymous opener is however quite melodious and does quite the opposite. The song reminds of Motorpycho’s mid-90s breakthrough. Hints of Timothy’s Monster (1995) and Blissard (1996) also fly around on The Same Old Rock (One Must Imagine Sisyphus Happy). Yeah, that is a very cheeky title but it does its job of being a part of The All Is One’s prelude. As expected the band brings some solid arrangements but at the same time we can’t escape the feeling that we’ve been here before two and a half decades ago. Our attention starts wandering off until a proggy segment on The Magpie breaths in some life. Hereafter The All Is One’s 40 minute centerpiece N.O.X. starts up. It’s a lot to take in but two things kept sticking after our first play: great build-up and intriguing versatility. We definitely need some time to digest this one so don’t stop reading just yet. After the multi-faced N.O.X. the band significantly gears down. Fragile structures on A Little Light or Dream of Fancy are carefully produced but also feels like a frail continuation. Especially Like Chrome seems too catchy to end a epically marketed album with. So after our initial spin we would deem The All Is One to be a slightly boring record that becomes somewhat frail near the end but most definitely has an intriguing core. Yup, we still tread lightly at the moment but it’s safe to say we are at odds.

Second spin: Because it’s always a treat to grab a Motorpycho record from our collection we almost forgot about the doubts we expressed after our first spin. However, that was our gut reaction so now lets really listen to The All Is One. After playing the opening tracks again we have to say these tracks are very well built. Although they still sound like straightforward rock songs, the orchestral arrangements do bring more colour to the table. The Magpie’s 70s prog outline definitely is a highlight of the first side of double LP. Tomas Järmyr’s clever drumming is key here as he binds the several phases the track goes through. Now let’s thoroughly talk about the N.O.X. suite that was recorded with help of Jaga Jazzist’s Lars Horntveth on keys and Steamdome’s Ola Kvernberg on strings. In five episodes prog, indie, electronia and heavy rock come and go. Circles Around the Sun pt.1 serves a gateway to Motorpsycho’s Carroll-ish Wonderland. A celestial violin pulls us and lets us land on territory that was first explored by King Crimson half a century ago. On the following episode, Ouroboro (strange loops), Horntveth’s synth signature takes over. Motorpycho itself adds some light Wilco-ish melodies and starts evolving them into a full-fledged harmony. Sæther intrepidly cuts through with a bluesy guitar line that eventually intertwines with Horntveth’s synths and the other guitar harmonics. Ascension brings some much needed rest but just before it gets too dreamy the fourth episode Night of Pan gradually starts fading in. During this mainly psychedelic trip the band also briefly touches the fields of prog, sympho and hard rock. Eventually a swelling organ, kicking drum and tense strings come together into a grand arrangement. Pink Floyd never seems far away. N.O.X. is wrapped up with Circles Around the Sun pt. 2. The psych-prog of Night of Pan collides with some aggressive alternative metal that reminds of Tool. Wow, at first we called N.O.X. intriguing but after our second spin we are left astonished. We heard Motorpsycho suites before but not like this. While the first notes of A Little Light felt like the relief we needed, we were just too bewildered from N.O.X. to write something meaningful about the album’s final four tracks. We’ll be sure to address them on our third and final spin. For now however, the odds for The All Is One to get a positive verdict here greatly increased.

Third spin: After putting LP1 on the platter for the third time and listening to the opening tracks we have to conclude that all of the songs here are at least a pleasant preface to the fireworks. Gradually the songs even start to sound very pleasant so there’s still potential here if you give it some time. N.O.X. however is already far beyond that point. Epic heights are reached on several segments. Especially the string dynamics catches our attention now. In almost complete freedom strings float over, under and between the constantly shifting arrangements. Apart from the resting point Ascension, N.O.X. continuous to be an intense ride. It’s one you want to take over and over again. We can’t wait to hear it live someday so let’s hope this pandemic fades away soon. The All Is One is wrapped up with four tracks which, after hearing them for a third time, feel like an anti-climax. Or that’s at least the case for the final two tracks. A Little Light is an acoustic lead in to Dream of Fancy which is built around a straightforward riff. When the song nears the end some bluesy guitar solos start swirling around the riff. So although the start is a bit dull, Dream of Fancy in the end is a pretty nice listen. The Dowser and Like Chrome alas have nothing special to offer. The Dowser is a nice ballad but doesn’t hit the right spot at this point of the album. On Like Chrome the heaviness unexpectedly returns. It even reminds of Pink Floyd’s classic Meddle (1971) closer Fearless for a few secs but the overrepresented nasal vocals spoil the party. Like Chrome will probably do great when played live because it sounds like solid work but as an album closer it just doesn’t work for us.

Verdict: As an album The All Is One surly isn’t the most balanced work Motorpsycho has the offer. Recording one album in two very diffrent sessions (France at the start and end and Norway in the centre) is an original thing to do but it also makes it hard to get caught up in a vibe of 95 minutes. Also take in the mind that the music from the session in France the band touches almost everything they have done before. On their own these old ideas are worth your time but it doesn’t help the coherency. The true pulse of The All Is One is found on the N.O.X. suite. Together with the help of some friends the band created an unique hard rock ballet which will probably go down in the books as the next Motorpsycho fan favorite.

After three spins The All Is One isn’t about ‘the all’ for us, but ‘the one’. At the time of writing N.O.X., The Magpie, Dream of Fancy are the ones we like most. But who knows what happens after 25 to a 100 more spins… One thing is certain, Motorpsycho never stopped rocking and they will most likely keep on rocking in the foreseeable future.

2 thoughts on “Motorpsycho – The All Is One”