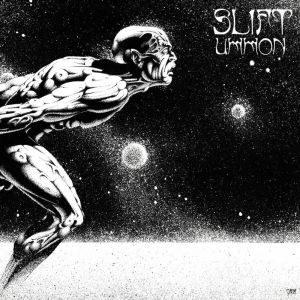 If you’re interested in heavy space rock coming from the capital of the European aerospace industry you better drop what you’re doing right now and check this one out immediately.

Due to the limited in store availability SLIFT’s was never a big thing over here in The Netherlands. Online however the SLIFT bandwagon kept gaining momentum after releasing UMMON earlier this year. Luckily, just before it entered light speed, we managed to grab a seat. So fasten your seatbelt everybody, you’re in for a wild ride through the cosmic.

SLIFT hails from Toulouse, a city in the deep south of France which is the centre of the European aerospace industry. Coincidence or not, brothers Rémi and Jean Fossat and their friend Canek Flores (who together are SLIFT) are sci-fi adepts and named the band after a character from a French novel, La Zone du Dehors by Alain Damasio about a pseudo-democratic society on one of Saturn’s moons. Sci-fi and fantasy stories are also the band’s main influence when writing. Yet, more earthly spoken, musically the guys are influenced by all kinds of punk, psych, prog rock and see Jimi Hendrix as their key role model.

Back to fantasizing about the final frontier. UMMON is what you can call a concept album which is as epic as Homer’s Odyssey but is mainly set in deep space. The story unfolds on 2 LP’s. The first LP is about the Titans leaving earth, building the citadel on a drifting asteroid and a search to find their creators. The endless search continues on the second LP but also tells the story of the birth of Hyperion. He eventually is forced to leave the citadel and roams the universe for millions of years. Eventually Hyperion lands on earth where he starts digging a cave with his bare hands. At a certain moment he takes a well deserved rest deep inside the cave. The rest is the start of the transformation of his body to a breeding ground of which all life on earth originates. Wow, that’s a pretty neat story if you ask us. With this story also also comes some amazing cover art made by comics artist Philippe Caza. You can check it out on our Instagram page or websearch it yourself, just be sure not to miss it because it’s stunning.

Oh right! You’ve been sitting here with your seatbelts fastened waiting for light speed to kick in for but we didn’t get anywhere. Well let’s do something about that: laying in a course to the heavy space rock formation on the second star to the right. Ready? Engage!

After a short lead-in Ummon immediately destructively starts blasting from your speakers. Under the tones of a wild Hendrix-like rock anthem we break through orbit in no time. While Earth quickly becomes a pale blue dot we find it hard to imagine that this massive sound only comes from 3 guys. The perfectly blended vintage rock & roll serves as an ideal start for the rest of the 70 minutes that still lie ahead. We spend most of the time in zero gravity surroundings so on the second track It’s Coming... the band turns to a more spacy side, an easily digestible one that is. The core of the track is made up of a heavy body of stoner which becomes heavier as the track pushes forward. Yet at set times a melodious evolving arrangement keeps piercing through the stoner riffs which keeps the track accessible for a larger audience who are not familiar with the space rock genre. Usually space rock anthems easily drift aways and become a trippy experience. It’s Coming… breaks free from this floaty norm and brings a steady building space rock track with a great opening, clear trajectory in between and ditto closing. The clear trajectory in between makes it a more or less unique space rock to listen too.

Now that we’re well on our way, we flip sides. Here the three grooves are titled Thousand Helmets of Gold, Citadel on a Satellite and Hyperion. The first here is an appealing continuation of It’s Coming… on which the band adds monolithic guitar riffs to strengthen the dramatics. On Citadel on a Satellite we learn from Jean that the Titans settle on an asteroid: “Calm and serene vista full of wonders you drift for ages for ages time signifies nothing”. Although a heavy metal riff is thrown in our face in the first seconds, most of the track is composed as a tranquil space-prog piece. Still midway things build up again and eventually become wild as lead guitar, bass and drums start overthrowing each other. It’s a crazy experience which gradually morphs into a long quiet synth lead-out. The destructive riffs return on Hyperion. The song introduces UMMON’s protagonist which at the same time also a smart cliffhanger from SLIFT to wrap up LP1 with. The track contains an exquisite groove, swirling around a heavy core of psych rock that keeps pounding through your brain. It’s very effective in getting you hooked for more. So, …you guessed right, here at HQ we didn’t waste any time. We swiftly changed records to continue the story of Hyperion’s wanderings.

Apart from the obvious link with Hendrix we haven’t discussed other references. Well, first we have to say that SLIFT created their very own thing of course but along the way you will easily be reminded of the usual suspects from the 60s-70s psych rock scene. Still, at some pionts we also hear newer acts like King Gizzard & the Lizard Wizard or Tropical Fuck Storm. Hyperion’s journey is picked up with the slow Altitude Lake which holds a wonderful Steve Rothery-like groove. Reverbs take over the rest of the C-side added with some jazzy instrumental. Things don’t get too wild a for the first time on UMMON it feels like SLIFT is drawing between the lines of space rock conventions. Dark Was Space, Cold Were the Stars is probably a great example of the latter with sniff of Gizz here, a sniff of Floyd there and so on.

On the final side Hyperion lands on Earth taking refuge in Son Dông’s Cavern (apparently the world’s largest natural cave). This track is one of the most proggy ones on the album. It leads in UMMON’s 13 minute apotheosis: Lions, Tigers And Bears. SLIFT immediately starts blowing off steam by speeding up to punk-level play. Strong riffs and screaming vocals make up the first minutes of the closing track. Hereather the fast pace becomes a framework for a proggy guitar jam which is later pushed aside for trippy bursts of trippy synths. Although the sound of the universe clearly never is far away in Lions, Tigers And Bears, SLIFT eventually ends the epic Titan odyssey with a whopping combination of punk-prog that reach their absolute height with some eerie sludge metal riffs.

After this ominous ending, we can’t help but wonder if UMMON is just the first volume of a far greater story. Well, we just have to wait it out. In the meanwhile SLIFT’s sophomore album is one for the books. Together with 2018’s La Planète Inexplorée they blow new life into the space rock scene. On UMMON the band succeeded in binding all sorts of rock music into a total package of spacey psychedelics. Could UMMON be a true ‘tour de force’? We’re not sure yet, although all conditions for being so are met: it’s musically awesome, tells a compelling SF story and includes album art that’s truly eye catching. Darnit! We’re gonna to play this record over and over in the coming months starting NOW. So fasten up everybody, get ready for launch: …5, 4, 3, 2, 1….LIFTOFF!