About a year ago a good friend introduced us to Tropical Fuck Storm as he played the uncompromising You Let My Tyres Down. Although the music was hard to pin down at that moment it was clear that the Melbourne based art punk band was throwing out all their anger towards the corrupt and xenophobe parts of today’s tech dominated society.

Tropical Fuck Storm can be seen as a reboot from another Australian punk outfit called The Drones. Ex-Drones Gareth Liddiard, Fiona Kitschin, MOD CON’s Erica Dunn and High Tension’s Lauren Hammel banded together and called themselves a ‘supergroup’. After releasing a few singles the band quickly made a name for themselves by touring in the US with Band of Horses and King Gizzard & the Lizard Wizard. The release of their first album, A Laughing Death in Meatspace (2018), further strengthened the band’s upcoming status. Some even compared it with the razor sharp early years of Nick Cave. So when that happens you have no choice as a band but the press on. In quick fashion a sophomore record Braindrops was released which also is supported by a late autumn tour through Europe. 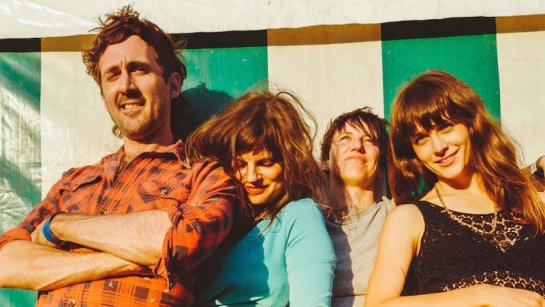 Opening track Paradise is a direct continuation of the chaotic riff filled parts on A Laughing Death in Meatspace. Liddiard sings about a broken relationship and, as he begins shouting: “Nobody out there loves you like I do” drumming lits up and guitars come crashing in. From this moment on the band goes to the max, stomping and pounding until the song comes to an abrasive ending. This ruggedness is not the standard for the rest of the album. Surely, blunt hooks in combination with aggressive singing are still in the core of Braindrops but there’s also a different layer to be heard on other tracks. On Who’s My Eugene? for example Erica Dunn picks up the microphone. In a cartoon-ish manner this track for the most part is one of their catchiest. Built around a simple bassline Dunn sings about drugs addiction. As the song progresses the other band members begin tweaking various elements while the volume of the guitars exponentially increases. Who’s My Eugene? thus feels like a weird dream that becomes a nightmare, or better said a very pleasant nightmare.

Directly after Liddiard seems to yank the mic out the hands of Dunn. On The Happiest Guy Around the nightmare gets a carnivalesque twist to it as Liddiard sings-raps about irrationality of online discussions while Erica Dunn and Fiona Kitschin teasingly chant: “Are ya ever ever gonna get over it? Are ya ever gonna learn to let things go?”. Here we find Tropical Fuck Storm’s greatest strenght: Liddiard’s voice, who constantly sounds like a maniac blended with the all-female vocals that cut through or intesify Liddiard’s words from the background.

After the album’s midpoint the band keeps leaning on the vocal interplay between its members. On the title track for example Liddiard again dictates the pace as Dunn sharply keeps intervening. Hereafter the album gradually paces down without losing its edginess. Guitars carefully crawl around each other on Aspirin while Liddiard, Dunn and Kitschin subduedly harmonize. With the slow burning instrumental Desert Sands of Venus the album almost comes to a complete standstill. Yet instead of blowing out a last gasp of air the band again takes you by surprise at the very end. The album’s closing track Maria 63 starts out as a warm fuzzy ballad… about Nazi witches and aliens that is. Eventually chaos bursts out again as distorted guitars take over and the shrill voices of Dunn’s and Kitschin’s who leave us in total dystopia.

Braindrops can been seen as the B-side of A Laughing Death in Meatspace. The unpredictable messy edges are very comparable so to us Tropical Fuck Storm’s debut consists of two album. With these two under the belt, we now know what this band is capable of. Their showcase performance at 2019’s Le Guess Who festival cemented the status of being the next exciting prospect around. Braindrops’ release however also brings this status to an end. The outfit could well grow out to be an established name in the alternative rock scene. Yet, this is just one of the many remote possibilities for Liddiard et al. Tropical Fuck Storm is having a ton of fun at this moment while moving foward at the same and I bet they don’t need a weatherman like me to tell them which way the wind blows.