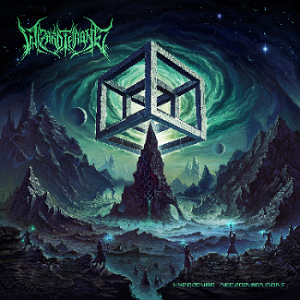 One glance at the track listing below would probably either make your head hurt, or rejoice in the conviction that British extreme Bal-Sagoth are at it again. But whilst the seemingly random jumble of words and the ludicrous length of the song titles are inherently reminiscent of the type of stuff Byron A. Roberts would come up with, what we are dealing with here instead is actually the debut album by international metal supergroup Wizardthrone. Comprised of members from Nekrogoblikon, Alestorm, Gloryhammer and Æther Realm, amongst a plethora of other bands, this is forty-five minutes of Christopher (nay, Hyperiax) Bowes basically going almost full Bal-Sagoth.

So, what you’ll find on Hypercube Necrodimensions is a weirdly effective blend of black and power metal. The speed is swift here, with the band raging through eight tracks with their foot firmly pressed down on the pedal, immediately getting through business with Black Hole Quantum Thermodynamics. The sound is suitably big, with the two guitarists eagerly riffing away and Bowes blowing things up to epic proportions with grand orchestrations. Morbistopheles Jones alternates wonderfully between blackened rasps and deeper grunts and every once in a while there will be some cosmic sounding narrator’s voice to change things up, and it’s here that the Sagoth-worship reaches peak levels.

Expect a lot of big, booming voices telling you about malodorous realities and luminescent sigils here. You’ll find elder gods and all sorts of things eldritch within these lyrics, and whilst they’re brought dead serious it’s hard not to crack a smile at how perfectly it all encapsulates Roberts’ lyrical style. It’s equally majestic as it is silly in how over the top it is. As you’d expect, things will be unshackled here, there are astral gates, cosmic deities and Lovecraftian multiverses galore, and the music gleefully follows suit. There is a part halfway through Forbidden Equations Deep Within the Epimethean Wasteland where Jones shouts “for the infinite omnispatial knowledge of the cosmos!” in that larger-than-life voice before the band heads off on the most Sagoth-sounding riff I’ve heard this side of The Power Cosmic (1999). It’s utterly glorious and it made me giddy as a school-kid. 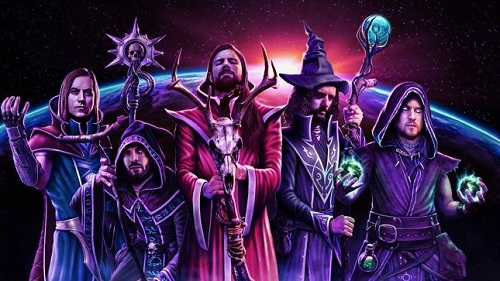 Musically, Hypercube Necrodimensions is great from start to finish. The entire thing spans eight songs and between the opening track and the thirteen-minute Beyond the Wizardthrone bringing things to an epic close there are highlights all over the place. That being said, this type of stuff isn’t for everyone. The material is extremely bombastic and so utterly stuffed with elements that it could very well become overwhelming for the more casual listener. Guitar riffs, blast beats, orchestration and different types of vocals constantly fight for attention and there is not a moment of respite to be found between these eight tracks. Production-wise this is a good sounding record, but there is only so much room one can give all the different parts to bounce off each other and untrained ears will find it hard to keep track of what’s happening.

That being said, for those who have been craving some bombastic, epic metal in the vein of either Bal-Sagoth or Kull, Wizardthrone has you covered with their brand of “extreme wizard metal.” Fans of this type of stuff will be right at home Hypercube Necrodimensions. Most wonderfully however, it’s yet another Christopher Bowes project that carefully walks the tightrope between parody and homage but ultimately makes it work. Not only do they playfully toy around with all the cliches of this particular style of metal, they also pull it off musically, and in spectacular fashion. As a debut album, it’s absolutely stellar and easily one of my favourite things in metal this year, and I sincerely hope this hasn’t been the last we’ve seen or heard from these space wizards.