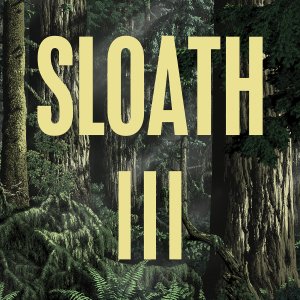 Genres, who needs them? Well, if you really can’t live without them: this review is about sludge, stoner, drone, psychedelic metal or… rock or something like that. To be more specific, it’s about a band called Sloath who have been stealthy binding all of the aforementioned together for quite some time now. Here’s your chance to get acquainted.

South England’s Sloath is a five piece sludge rock outfit who stand in a small corner of the music business. Sloath’s loud and slow play has existed since 2007 but only reached the few who were alert enough to pick up at least one of the two sparse releases in the past decade. Their last release (if you remember them at all) Deep Mountain comes from 2014 and finally is succeeded by III. To celebrate this joyful event we opened up our amp to the full, tempoed down to a snail’s pace and penned down a few words about this crushing new record.

III compares to Deep Mountain amp melting distortion. So if you’re looking for stoner, noise or psychedelic doom, you’ll be in for a treat. Still III also sounds very different and is deeper and more streamlined than its six year old predecessor. While Deep Mountain strongly reminds of Earth or Sleep, III is more a thing of its own.

III holds six tracks which together roughly take 35 minutes to complete. Sloath immediately starts testing the limits of your soundsystem with Big Shift. A slashing hypnotic riff which is surrounded by a swirling hook combined with echoing vocalisations sets the heavy tone we want, …or no, lets rephrase: we desperately need to hear. Big Shift is followed by Rewengue that is the most hooky track and is built around a heavy blues loop. The mechanics remind of Motorpsycho’s mid-90s stoner work but where the Norwegians always are looking for a way out, Sloath just keeps deepening the loop. It takes a new track Special Force (what’s in a name huh?) to shift the gears from Rewengue. In the first few secs we thought we heard the first tones of Pink Floyd’s Money. Although we cannot unhear them anymore, Sloath professionally morphs these tones into a very different heavy fuzzed guitar grind that is accompanied by some trippy vocals. As the track progresses the full bodied wall of sound is slowly whipped down by stereo feedback that eventually breaks up the track and the first half of III with it.

On the B-side Sloath thoroughly paces down with The Piece. Without drums a gorgeous riff meanders through the track and takes you to a dark place. The band intriguingly keeps full sonic control here and slowly evolves the riff. Normally you would expect a sudden break at some point but instead they carefully add echo and feedback curls. This slow but special move pulls the 8 minute track from darkness into something that you can even call a comforting experience. A doomish one of course. After this Sloath brings in the shortest track on the album. The Beast is sort of a wake up call as it picks up the pace from Rewengue and brings back the drums and vocals. Especially the vocals stand out here because they’re once again incomprehensible shouts and mumbles drowned in echoes.Together with the guitar groove it gives an overall feeling of being on a spacy adventure somewhere in the 70s. Although The Beast dragged us deep into our imagination The Whistler alas brings the album to a close. The disciplined slow-tempo drumming here sets the context for the distorted riffs to shine. These riffs create some surprising noise that lurks around between the tracks layers.

If you have been paying attention it goes without saying that III is a work of a band who have finally perfected their craft. Sloath was standing in the corner of a subgenre of a subgenre with some great bands before then. Now, after hearing III we have to conclude that the band has a right to stand tall among those same bands. Hopefully they will help to keep the genres of sludge metal and drone metal alive but let’s save that discussion for another time. For now we at SftDS are going to enjoy III to the fullest by possibly blowing up an amp or two (yikes!).