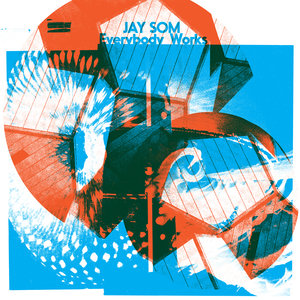 Melina Duterte has a clear message for you: Don’t worry. R-E-L-A-X, we are going to be OK.

Melina Duterte, AKA Jay Som, was bound for a conservatory education in jazz but instead left her trumpeting skills behind to dedicate herself to songwriting. From here the story goes on as we hear all the time nowadays: Duterte recorded a few demos in her bedroom, uploaded them to Bandcamp and the internet did the rest. Notable bands, such as Peter Bjorn and John, to booked her as supporting act and as it was part of a package her Bandcamp demos were quickly molded to an official album in 2016. Duterte’s management is keen not waste the momentum and decided to release a follow up within the year which carries the title, Everybody Works.

On Everybody Works the California-based 22-year old mostly sings about being stuck in a rut in day jobs, the uncertainty she had to overcome in her pursuit to be a singer and how to handle (or not to handle) the pressure that comes from her own family. The 10-track album was made by Duterte in a three week marathon recording session. Every instrument is played by her and is put together be her own hand resulting in a harmonious record with some sharp touches.

It’s too easy the categorize Jay Som’s music as average indie pop although the first appealing track, ‘The Bus Song’ is as plain and catchy as indie tracks come nowadays. On the track Duterte sings about a relationship nearing its end and takes a bus ride as a metaphor for the time to figure out on how they want it to end: “Take your time. Won’t be long til our car breaks down […] Why don’t we take the bus? You say you don’t like the smell. But I like the bus. I can be whoever I want to be”. Other tracks are somewhat less catchy because of the rawer guitar work but do sound familiar. ‘Take It’ and ‘1 Billion Dogs’ could just as easily be part of the 90s alternative rock scene. ‘1 Billion Dogs’ end with a nice distorted Deerhunter-ish guitar solo that makes you want to grab your skateboard for some good old fashioned kickflips. Versatility doesn’t stop here for Jay Som. The more laid back side of Duterte comes into play on the gazy ‘Remain’ and the more intense ‘(Bedhead)’. Again a form of struggling is addressed by Duterte. This time is about her performing as an artist. Stepping out on stage, thinking it’s all a big mistake because the room is empty but ultimately gathers enough strength to perform anyway.

Uncertainty is a theme that comes into play almost constantly on Everybody Works. Only the context differs on each track. It could be about being an artist, the coming of age or adolescent love. Duterte does a fine job of crafting a different soundscapes that comes along with the ever changing context. With it Jay Som distinguishes herself from the ever popular slacker rocker who usually just celebrate the good-for-nothing life of the average wannabe hipsters. Fans of uber-slackers like Mac DeMarco who are in need of some meaning in their life should be wise and pick up on Jay Som. The music is just as messy and fuzzy but the message way more rewarding: don’t go numb when times are tough, keep your head up, keep working for it and all will end well.

One thought on “Jay Som – Everybody Works”