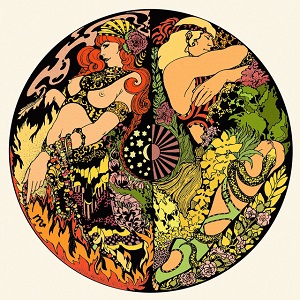 Blues Pills return with the long-awaited follow-up to their excellent debut album. But does Lady in Gold live up to the hype?

“Truth be told, Blues Pills have set the bar very high with their first proper release. Impossibly high even, perhaps, as I personally don’t see them topping this very quickly.”

That’s what I said back in 2014 when I reviewed Blues Pills’ debut album. It remains an excellent album, and a remarkable debut, even though a little of the raw edge the young foursome imbues in their live performances is lacking on it. The self-titled record still spins its rounds on a regular basis here, which in itself is saying something. There’s a very timeless quality about it, and it would always be hard to come up with a satisfying follow-up. Lady in Gold’s biggest problem is just that: having to fill an enormous pair of shoes and having to live up to an unfair and impossible amount of hype. Kudos to the band then, for trying something a little different within their own musical box, defying expectations in a way and keeping things interesting in another.

The sophomore album kicks off with the titular song, immediately laying the groundwork for the rest of the album. There’s a little less blues this time, and a lot more soul. So much soul, perhaps, that the band might seriously want to consider renaming themselves Soul Pills. Not necessarily a bad thing, this does however mean that Elin Larsson’s vocals are front and centre, background choirs are ramped up to eleven and Dorian Sorriaux’s guitar wizardry is turned back a few notches. The latter, of course, being very much a bad thing. It’s not that he’s completely absent, and there’s enough fun playing somewhere in the background, but the raw energy and musical prowess the band has become known for through their live performances and excellent EP’s is notably gone on Lady in Gold.

Another problem which starts right off the bat with the title track, is that most of the material is all build-up, but without the payoff. The first song has a brooding, swelling quality to it but never seems to reach a suitable climax. Little Boy Preacher has the exact same problem. Good rhythm, fine melodies and no real chorus to speak of. Another thing hampering the material is the constant use of background choirs. Now, I have nothing in particular against backing vocals, but the incessant use of them on Lady in Gold grows tiring very, very soon and before long starts to become grating.

“Well, is there nothing positive to say about this band’s second effort?” I hear you ask. Whilst the truthful answer is “not as much as I’d like,” it does get better after the first two songs. Burned Out is a thing of beauty, with its meandering melodies and ever-present slide guitar. Gone So Long is wonderful, with some great stuff from Sorriaux. You Gotta Try has a nice, old-school bluesy vibe about it. These are good moments, and it’s in these moments that we recognise the immensely talented band we got to love through their live performances. They are far and few between though, and Lady in Gold’s biggest problem is that for every good song it holds, there is a lesser track. It bogs down the album as a whole and, you can’t help but wonder what happened to these guys between their debut record and this one.

Lady in Gold is not a bad album. Not at all, actually. Blues Pills still know how to write good songs, and I’m unwilling to believe they stopped doing that to deliberately make a more slick and commercial sounding record. Still, these four young people can do a hell of a lot better, and though sparks of brilliance shine through here and there, the band’s sophomore effort is ultimately a slightly disappointing affair, marred by an overall very tame production and a sore lack of power. Let’s hope these guys haven’t lost it altogether and that the third album will pick up from where they left off in 2014.