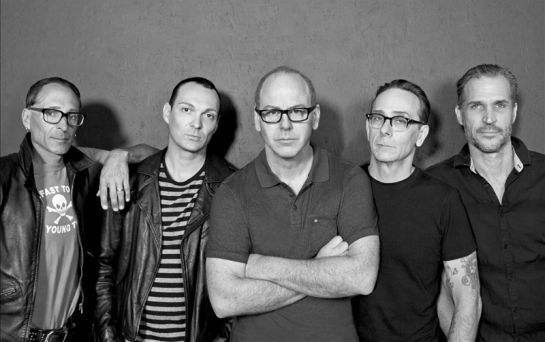 A sold out Doornroosje in Nijmegen gave host to American punk rock legends Bad Religion on an otherwise unremarkable Tuesday evening. Sounds from the Dark Side went to check them out.

The venue is already packed with people when Frank Carter and the Rattlesnakes take to the stage. Clad in a ludicrous costume, you’d mistake Carter for an English madman instead of a musician. Maybe he’s both. The band can surely rock though, and Carter creates a rather intimate atmosphere, giving you the feeling you’re at a small pub gig. Sadly, this is at the expense of a solid, music-filled show, where songs seem far and few between when compared to the myriad of anecdotes, funny though they may be at times. Not a bad concert, but a bit uneven overall, especially given how tight Bad Religion can be when they’re on fire.

My, Greg Graffin is really starting to look more and more like a university professor, doesn’t he? Sporting a still decreasing tuft of grey hair and glasses, you’d be hard pressed to think he’s a singer in a punk rock band. Good thing he sounds a lot better than most on the vocal side of things, still going strong at 51. After a bit of a murky start this evening – a combination of warming up, playing newer material and figuring out the sound in the venue – he’s still a dilligent frontman to a legendary American punk band. After an intro that’s longer than anything not featured on Into the Unknown, the band starts off with Crisis Time (from True North) and, for a little while, doesn’t really knows what to do with itself. The sound is a bit off, the guys seem lacklustre and on automatic pilot, the crowd doesn’t really respond to the material and, well, what the hell.

The going gets good, and stays good, though, from No Control‘s I Want To Conquer the World onwards. “Oh, you want to hear the old, good stuff,” Graffin jests. Why yes, Greg, we do. It isn’t the last “We are older than all of you combined” jokes tonight, but even though the material might be old, or old-ish, by golly, it’s good. Playing in little blocks of songs from each album – a few from Generator, a few from Against the Grain, a few from, well, you catch my drift – the band, and the audience, has a blast plowing through what is probably their best period (Suffer through Recipe for Hate), with a few bits and bobs from other albums in between.

As the evening progresses, the band gets better, the crowd gets better and maybe even the songs get better. And for a band that’s never really wrote a hit single, there are a lot of hits being sung by the crowd word for word tonight, with Los Angeles is Burning, Sorrow, 21st Century (Digital Boy), Atomic Garden and Modern Man being able to count on more than a little public participance. Whilst perhaps not the best Bad Religion concert I’ve ever seen, these guys still hold their own on stage, and still manage to give you the night of a life time. A band to definitely go and see when they’re in the neighbourhood.