Mayan temples, voodoo rituals, redcoats, monsters, a Boeing 747 piloted by a vocalist and a bassist trying to shoot the audience with his bass guitar. Yep, Iron Maiden‘s back in town, and we were there. Because of course we were.

We almost didn’t get a The Book of Souls World Tour. It took the band a staggering five years to release another album, and the subsequent tour was postponed to allow vocalist Bruce Dickinson to recuperate from his bout with cancer. Bands and artists are dying or calling it quits across the board right now. Lemmy is dead, Black Sabbath is calling it a day, Rush has stopped touring, AC/DC is hanging on to dear life with Axl Rose filling in for Brian Johnson and Manowar just announced they are laying down their arms as well. We’re rapidly losing the big bands we grew up on, and after the news of Dickinson’s tumor last year, there’s a sense of relief across the board that we’re very lucky to still have Iron Maiden knocking about. Naturally, this results in a ridiculously packed Gelredome.

Of course, Iron Maiden brought a support act on this tour, this time opting for UK based The Raven Age, which, probably not entirely coincidentally, features Steve’s son George Harris on guitar. In the past, Maiden has brought along Lauren Harris’ solo band, and Rise to Remain, featuring Bruce Dickinson’s son Austin, so this is just another round of Bring Your Kid To Work Day. And just like the last time back in 2013, traffic jams on the way to the venue prevents us to see what the current support act has to offer. But if I had to hazard a guess, I’d say “not much,” just like just about every single band opening for Maiden.

Because let’s be honest: is there anything else than Iron Maiden these  22,000 metalheads are here for? I think not, and as soon as U.F.O.‘s Doctor Doctor blasts through the speakers, heralding the start of the gig, all eyes are set on the stage. When the house lights go down, the tour intro starts (it’s brilliant) and the band launches into The Book of Souls opening track, If Eternity Should Fail, you can almost feel the collective sense of relief. The gang’s still here, and they’ve still got it. Even though it takes two or three songs for the sound to get somewhere near acceptible, you can already hear that Bruce is in fine form tonight, and you can see the band is having heaps of fun being there.

During the last proper “album tour” the guys did for The Final Frontier (jeez, was that in 2011 already?), the balance was a bit skewed at the start, favouring a barrage of new songs before launching into the old legacy stuff (to paraphrase Dickinson: “We’re not old, we’re legacy.”) So after Speed of Light, we’re treated to the always brilliant Children of the Damned. If the inclusion of Tears of a Clown, the power ballad dedicated to the late, great Robin Williams, is such a good idea at this point in the set, though, is anyone’s guess. The Red and the Black, however, just like I predicted, does very well live. On the album, the first half practically begged to be played live, with its ‘woo-hoo-hoo’ parts, and it’s great to see the audience respond properly to that. And the second part of the song is just one great guitar battle between Smith, Murray and Gers. Great stuff, especially for Janick, who goes absolutely ballistic as soon as the pace quickens, prancing and dancing about like a madman.

Then the backdrop changes again (which it does just with every song played), and at the sight of “Trooper Eddie,” the crowd goes nuts. The Trooper, played to death, remains a live staple in Maiden‘s set, and it’s one of the biggest fan favourites at concerts, so it’s earned its place. A bigger surprise is the inclusion of Powerslave after that, where Bruce dons a luchador mask instead of that weird, feathery thing he used to wear. Both Death or Glory and The Book of Souls itself turn out to be really, really great live songs tonight. The first has an entirely different energy live than on the album, and the quick-paced stomper that it is, I’d not be surprised if it would turn up in the set again in a future tour. The latter is a great epic with a rousing conclusion, with another round of guitar duels and the first big, walking Eddie stomping about on stage, and Gers going positively nuts again. You can’t help but wonder, with all the running and guitar-throwing he does, if he’s even plugged in half of the time.

The regular set is rounded up nicely by the epic Hallowed Be Thy Name, which is always a great addition to the set, Fear of the Dark (which isn’t; it’s a fine song, but can we please, please get this crowd-pandering, bore of a song out of the regular set already?) and, of course, Iron Maiden, ending with a huge Mayan Eddie looming high behind the drum kit. As an encore tonight, we are treated to The Number of the Beast (another one of those done to death songs, in my humble opinion), Blood Brothers and Wasted Years, before the crowd can happily go home whistling to the tape of Monty Python‘s Always Look on the Bright Side of Life.

Iron Maiden has still got it, whatever it is. The band is still in fine form, even though they manage to cock up royally during Blood Brothers and Fear of the Dark, where everyone has some trouble finding the right pace after the middle part, but that’s part of the charm. Maiden is a well-oiled machine, but even they are human, and when the fact that they still screw up sometimes is due to their having fun and being enthusiastic, no one in their right mind can complain. Let’s hope they still have a few more years in them. Up the Irons! 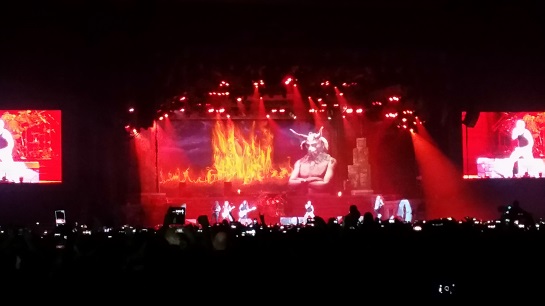