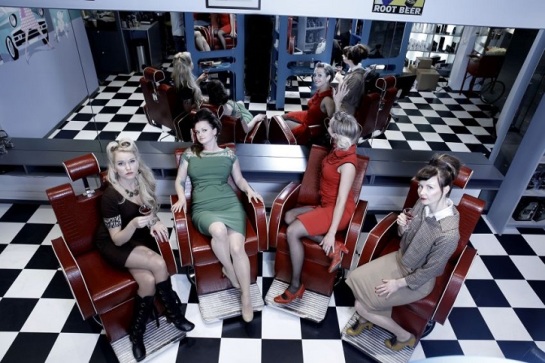 Ah, Katzenjammer. Four women with an inordinate amount of musical skill playing a mixture of folk, rock, blues and bluegrass. And they even look good doing it. What’s not to like? Not very much, as it turns out.

Amsterdam’s Paradiso venue is packed on Sunday, March 22nd. They could not cram any more people in there if they wanted to, and as usual, the place feels oversold. You also get the feeling that Katzenjammer is getting a bit too big for a relatively small venue like Paradiso. The girls might consider an upgrade to the Heineken Music Hall next time they come to Amsterdam.

Having said that, there really is nothing bad to be said about the concert itself. Of course you can quibble over the songs that were played versus those that were omitted from the set list, but the girls gave it their all, the crowd was loud and excited and the music as good as always. It seems like Katzenjammer is getting better and better as they go on, at least live, and tonight’s performance proves that. The focus lies primarily, and understandably, on the brand new record Rockland, although I was quite surprised to find that the band played the album in its entirety over the course of the evening. Don’t get me wrong, it is a good album which I very much enjoyed, but there are a few songs on there that could easily have been left out in favour of a few audience favourites like To the Sea or Le Pop, but I guess you can’t have anything.

Minor quibbles aside though, what Katzenjammer does, it does very, very well. The evening starts off with a bit of a crawl on Old de Spain, but I’ll be damned if the band doesn’t make up for that in the next hour and a half. Especially the pieces with Marianne Sveen behind the microphone are a real treat. She croons like a sultry lounge singer and shrieks like a banshee, and does all of that with so much conviction you can’t help but be impressed. Led by Sveen, the band tears (and I mean absolutely rips) through songs like Ouch, Curvaceous Needs and a blistering version of Demon Kitty Rag. It is in these moments that Katzenjammer becomes something bigger and better than on record. On the other hand, these songs form such highlights that they reduce the rest of the evening as filler for yours truly. Katzenjammer soars so high at times that it’s hard to follow it up properly. Following a thunderous version of Hey Ho On the Devil’s Back with Lady Marlene makes the latter fall rather flat. When Katzenjammer goes all-out, they out-do themselves in the process, and it’s a little weird to behold.

Still, when you look at the set list below, there really is nothing much wrong with it. Throughout the concert, all four ladies get their turn behind the microphone, and instruments are still swapped (although not as much as they used to). It must be said that both Solveig and Marianne get the most time in the limelight, and for good reason. They possess the best pipes and the best sense of audience interaction of the entire troupe, and relegate Turid and Anne-Marit to mere backing musicians at times. It also must be said that the tracks from Rockland – yes, all of them – sound a lot leaner and heavier in their live renditions than on record. And although the bass is a bit too loud at times, the sound is quite good in Paradiso tonight, complimenting the diversity of songs and the individual performances of the band members. Other highlights are a goosebump inducing version of God’s Great Dust Storm, Bad Girl and, of course, A Bar in Amsterdam. I could have done without that cover version of Genesis’s Land of Confusion at the end during the encore, but that’s really my own proper complaint. A great night, all in all.