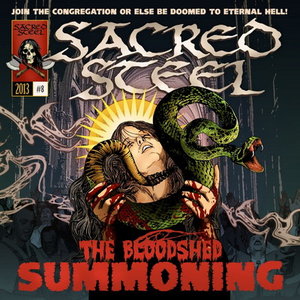 There used to be a time when German true metal formation Sacred Steel were much maligned for what they were doing by the international press. The lucicrously traditional brand of heavy metal was too old-fashioned for a lot of people, the vocals of metal siren Gerrit P. Mutz were (and are) definitely not for anyone, and each and every record the band put out was immediately relegated to whatever type of album-of-the-month-lists magazines were sporting at the time. However, that was a long time, and a lot has happened since.

Back in 2002 the band released Slaughter Prophecy, and there was not only a radical shift in sound for Sacred Steel, but an immediate increase in acclaim from the press as well. Slaughter Prophecy steered away from the pure, traditional heavy metal of old, and incorporated elements of death metal and doom into the sound. The result was a remarkably refreshing album, not in the least because of the meshing of those different styles. Since then, the death metal influences have abated a little, and although the band has turned back that more traditional heavy metal sound, there is still a large amount of doom and Mercyful Fate styled traditional metal going on here.

Fast-forward to 2013 and the release of The Bloodshed Summoning, the eighth effort by Mutz and his band of unmerry men. Graced with deliciously old-school comic book type artwork, the album opens with Storm of Fire 1916, which has the band firing on all cylinders. Guitars shred, double bass drums pound and Mutz rips through the song with the enthusiasm and devotion of a newborn man. It’s a great start to fifty-odd minutes of terrific heavy metal. Most of the songs have once again been composed by relative newcomer Jonas Khalil, who proves he is able to walk that fine line between quality, traditional metal and Manowarrian cheese.

The Bloodshed Summoning is not as brooding and evil sounding as Carnage Victory, with its warped guitar riffs and unpredictable melodies, and instead focuses on more accessible songs. This results in Carnage Victory still remaining my favourite album of the band to date, although this new effort features a good amount of really great songs. Especially when the music becomes more like a sort of power doom metal (is that even a thing?), Sacred Steel really hits home. The title track and the epic Journey into Purgatory are great examples of that, although you can always wake me up for a blazingly fast track like Under the Banner of Blasphemy or the decidedly Jag Panzer-ish  Black Towers as well.

In the end, though, The Bloodshed Summoning is another great Sacred Steel record, and for a band that really hasn’t disappointed so far, that’s saying something. This eighth record once again won’t convert the nonbelievers, and no-one expects it to. Those who have followed and liked the band through their previous efforts, however, can add this one to their collection without second thought.