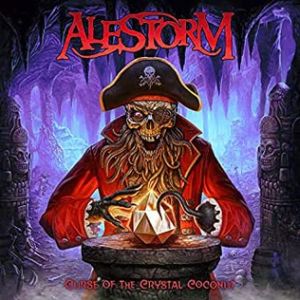 The pirates of Alestorm are back with a sixth record so grab your rum, eyepatch and parrot and let’s see what’s up!

Christopher Bowes is a funny man. If he isn’t gallivanting through space with Gloryhammer and its laser-powered unicorns, robot eagles and flying nuclear submarines, he’s sailing the seven seas with Alestorm, drinking your beer and stealing your rum at the point of a gun. I still hold their 2008 debut Captain Morgan’s Revenge and its successor Black Sails at Midnight in high regard, although I must admit that I kind of lost track of the band after that. Once in a while a new single would crop up on YouTube and they’d always be amusing and funny but being so familiar with the first two albums and their much more serious tone I assumed that these singles were the exception to the general rule. Imagine my surprise then to learn how laugh-out-load funny Curse of the Crystal Coconut (and basically everything from Back in Time onwards) really is.

After holding off and eventually caving in on Gloryhammer I of course should have known better. With Gloryhammer, Bowes and his men carefully walk the line between pure comedy and quality power metal. By playing to the genres tiresome and oftentimes downright silly tropes and delivering that completely straight-faced, Gloryhammer will occasionally have me giggling with pure glee at how insanely stupid this stuff really is. I should absolutely not be surprised by how Alestorm apparently turned into the same thing but with pirates, but somehow I still was. That’s because for all those years I missed out on Back in Time, where the metal pirates go back in time to battle Vikings. I had missed the deadly fate that is Midget Saw, Surf Squid Warfare or the sordid tale of Wooden Leg, to which Crystal Coconut sports a sequel. I had not heard Fucked with an Anchor before. So after thoroughly enjoying the new album, I went back to the three albums I had missed and got myself up to speed in order to write a proper review.

In short: Curse of the Crystal Coconut is filled with 45 minutes of incredibly good “pirate metal” and lyrics that more than once caused me to laugh out loud. It’s an immensely well crafted album that offers eleven songs with more sing-along choruses and catchy hooks that you can count. Eleven songs full of ridiculous, delightfully silly lyrics on top of some really good songs. More important even is that Crystal Coconut is a really fun ride from beginning to end by a band that’s good at its craft and never takes themselves seriously. The party starts with Treasure Chest Party Quest where the band immediately proclaims their mission statement: they’re only here to have fun, get drunk (and make lots of money). Follow that up with a live classic to be like Fannybaws and a fast thrasher about crocodiles gnawing your feet off (Chomp Chomp) and you’re off to a rollicking good start.

There isn’t a bad song on Curse of the Crystal Coconut, although some songs are definitely more memorable than others. Tortuga will surprise most people at first glance with its hip hop stylings and guest appearance by Rumahoy’s Captain Yarrface, but will stick in your brain after a few times. My favourite song at the moment of writing is Zombies Ate My Pirate Ship, which is as musically epic as it’s lyrically stupid and features some very nice hurdy gurdy and vocal work by Patty Gurdy. Another highlight is Shit Boat (No Fans) where you can happily sing and clap along to the pure pirate poetry that is Your Pirate Ship Can Eat A Bag Of Dicks. But perhaps the best song on Crystal Coconut is the sequel to the two-and-a-half minute long Wooden Leg. In that song, the protagonist had both his hands cut off clean by a Japanese bastard and his legs taken by a greasy old Spaniard. In this perfectly aptly titled Wooden Leg Pt. 2 (The Woodening), that protagonist has eight minutes to exact revenge on them and get his limbs back. It’s epic with gleanings of melodic black metal when it comes to the riffing and keyboards, a great chorus to shout along to and a hilarious ending I will not spoil here. The Coconut comes to a close with the Scottish traditional Henry Martin.

People who know me know I like epic stuff as much as anything deliberately stupid, and Alestorm manages to be both. The lyrics are memorable enough for anyone to be able to sing along with after two listens, each of the songs is insanely catchy and if you won’t get at least one chuckle out of Curse of the Crystal Coconut you might be completely beyond redemption. Highly recommended stuff at any rate for fans and newcomers alike.

2 thoughts on “Alestorm – Curse of the Crystal Coconut”