Cellar Darling is back to weave a second spell, but is it strong enough?

Before I’m able to even start reviewing The Spell, swiss folk metal band Cellar Darling’s sophomore album, I have to get something off my chest regarding the 2017 debut first. When Anna Murphy, Ivo Henzi and Merlin Sutter left Eluveitie, they did not waste any time and quickly continued to release their debut album This is the Sound. And goodness me was it good. It still is. I thought it was great when it first came out, making it to the fourth spot on my list just behind Ex Deo, Jag Panzer and Roger Waters. It has grown from there even, slowly turning into one of my favourite albums in recent years. If I had to make that same list again, chances are that only Waters would retain his position in the top three. It’s that good and if you haven’t yet I highly recommend you check it out. I’ll wait.

Now wasn’t that something? It’s a little rough around the edges of course, which is to be expected from a debut record, but it oozes charm. Stylistically, the material is quite varying whilst the band still very much establishes a distinct own identity in the process. Equally playful and melancholy, there’s a lot to enjoy on This is the Sound (and their cover version of Queen’s The Prophet’s Song on the limited edition CD version is absolutely wonderful). This was a band with talent to spare and a hopefully bright future ahead of them. 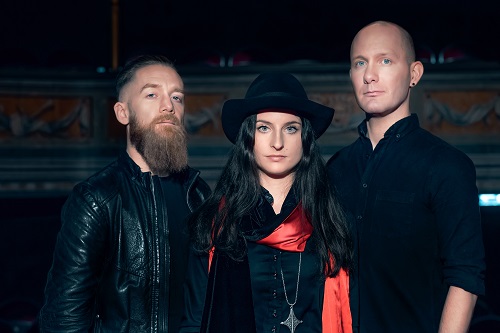 Fast forward to 2019 and Cellar Darling are back with their sophomore effort The Spell. Having dropped a surprise single late 2018 in the form of Insomnia, things hinted at a more sophisticated, darker and progressive take than what we got on the debut, and it turns out Insomnia was a very good primer for what the band had in store this time around. The Spell is a highly ambitious undertaking for a band that’s just two albums in. It’s a concept album in the most classic of forms. There’s a thought-out, overarching story, there are leitmotifs to hammer home the musical concept and, if you buy the limited edition digibook version, you even get Anna Murphy explaining the concept song by song in audiobook form. Now that’s all well and good, I hear you thinking, but what about the music? To that question, my friends, the answer is short: blimey, it’s bloody fantastic.

Based on the age old motif of Death and the Maiden, The Spell tells the captivating story of a girl who falls in love with Death. It’s a melancholy story and the music is well suited to the tale. Album opener Pain immediately drives home the amount of growth this band has gone through in the short span of time since This is the Sound. There is an urgency and immediacy to the music here; there is a story to be told here and the band wastes no time getting to business. Apparent from the start is that this will be a much darker record. The riffs are heavier and the overall sound is, for want of a better word, more serious. Undisputed star throughout the entire album is Anna Murphy, whose vocals were already a high point on the first album, but really puts in a stellar performance here. Often reminding of former The Gathering singer Anneke van Giersbergen, her vocal work really lifts the songs to a higher level.

Murphy not only impresses vocally, but instrumentally too (so do Henzi and Sutter of course, before I’m blamed of giving anyone the short shrift here). Death ends on a haunting flute solo, harking back to the age of seventies progressive rock, and the hurdy gurdy solo that graces Insomnia about halfway through has to be heard to be believed. Those are just three of the thirteen tracks on The Spell, which has an overall playing time of sixty-three minutes. While I maintain that the perfect length for most albums is somewhere around the forty-five or fifty minute mark, The Spell makes for a happy exception to that rule. It might clock in at over an hour, but it never feels long.

Each song is a wholesome and very finished entity here, with all parts so meticulously placed that if you would even take the tiniest fragment out, the entire thing would come apart at the seams. That’s what makes a great concept album; take one song out and the album as a whole fails what it set out to do. Take out the quiet and eerie Sleep out of the equation and the following Insomnia gets stripped of much of its power. Cut away Death and Love loses a lot of what makes it enticing. The songs work fine on their own, but every element here is an integral part of something bigger, and it’s a true concept album in that it works best when heard in one sitting. There’s an urgency to the material, with the narrative driving the music and the music itself lifted to a higher plane because of that narrative. This is how great concept albums should be done.

Cellar Darling have taken the very solid foundations of This is the Sound and built, expanded and improved on just about everything. The songwriting is more confident, showing a band that has matured and grown since the last album. The material is less varied than on the debut, but more complex and layered than ever before and, because it has to serve the narrative, has a more cohesive feel to it. The production is better by miles, feeling warmer and more organic whilst retaining a crystal clarity. You can put The Spell on and enjoy a very good progressive folk rock album, but there are many secrets it will only slowly reveal over time if you’re willing to put in the time and let it. Every once in a while a truly magical album is released, and I sincerely hope that Cellar Darling’s second effort will receive the recognition and praise it deserves in time as a true genre classic. I for one can’t praise this one high enough.

3 thoughts on “Cellar Darling – The Spell”