For some reason I just can’t seem to pronounce OOIOO right. I’ll take one more shot at it…: oh oh eye oh oh…. *yes!* is a Japanese all-female experimental rock band that was led by Boredoms drummer and occasional trumpeter and vocalist YoshimiO in the mid-nineties. We ran into OOIOO during an afternoon scrolling session on a stream service a few years ago and loved their seven pieced catalogue immediately. Their latest work, nijimusi, arrived just in time for us to review it this month but more importantly, nijimusi gives January some much needed colour.

OOIOO’s style always was very “out of the box”. If you heard older works you will know that OOIOO is all about the experiment. This lack of holding on to one style is what’s keeping them interesting for twenty years now. nijimusi once more is a random leap into an unknown direction. Their previous release Gamel mostly was a hypnotic record based on the traditional Indonesian gamelan. Now however the band brings back the guitar in the centre and melts in slices of free jazz, math rock and a pinch of prog. Hypnotics are thus replaced for 51 minutes of freewheeling Japanese screaming and instrumental chaos.

In the first fifty seconds squalling vocals seem as a lead in to a hardcore IDM-meets-punk record. Nicely the next track nijimu brings in a fast paced montone jazz drum that halfway through cuts to a cool bass motif which is dictated by some angular vocals from YoshimiO. nijimu slightly reminds of Deerhoof but as said, doesn’t stay in one place for a long time. jibun starts of more toned down and soothingly swings to the midway point in which OOIOO suddenly decides to whips up some punchy drumming to enter full rock mode. In this “style”, the band keeps zig-zagging throughout the remainder of the album. 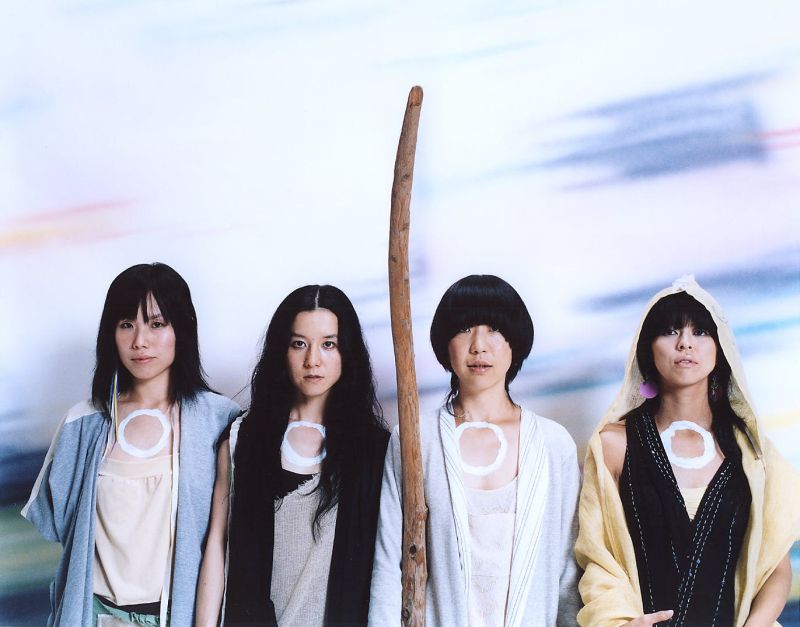 Madness continues on songs such as tisou and bulun. tisou makes you feel like you’re stuck in a cage of monkeys for the first part but gets more momentum when the beat kicks in and funk is alternated with minimalistic yet also danceable polyrhythms. bulun has a more vocal approach and in about eight minutes harmoniously unfolds to an intense space opera. OOIOO will probably win the award for 2020’s best song title which also is the centerpiece of nijimusi. The track walk for ‘345’ minutes, while saying ‘Ah Yeah!’ with a ‘Mountain Book’ in one Hand, until a shower of light pours down is the albums slow burner. The slow proggy embarkings build up in speed after a few minutes in. Hereafter a few precise zig-zags, shape-shifts cut through the song structure and eventually climax in a confusing wall of noise.

OOIOO has been unfairly taken for granted for a long time now. With this release they once more prove that they are among the best in the field of accessible experimental rock. Or let’s say accessible only for those who like their music to be jarring, bedazzling and tiresome that is. Others would perceive nijimusi to be the next irritating mixed bag that leads to nowhere. We at SftDS however can only conclude that after two decades of work OOIOO’s banner still flies high and at no occasion the band makes the mind turn numb.