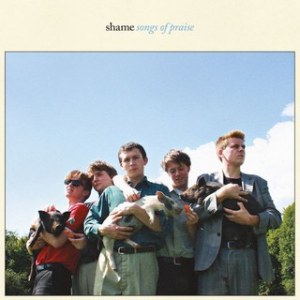 It’s time to blow off some steam boys and girls!

The 20-year-old Charlie Steen, frontman of Shame, really hates the iconification of rockstars. He told The Guardian that “the idea of the leather jacket-wearing, womanising, drug-fuelled rock star should be burned”. Well look at him now, together with four of his lads they released Songs of Praise which some already call the first essential album of 2018. Now let’s see what all the fuss is about.

It took Shame just ten days to record Songs of Praise which is an achievement on own. From the front to the back the album’s familiar white guitar riffs take you back to punk rock scene of old without leaving the modern ‘have-have not’ context in which many youngsters live today. As a gang of self-conscient rebels Shame smashes through a wall with some relentless guitar hooks and screaming vocals on ‘Dust on Trail’. A Dick Dale-like surf guitar on ‘Concrete’ together with call and answer vocals between Steen and guitarist Sean Coyle-Smith works nicely here by raising the band’s spirit. After this explosive opening ‘One Rizla’ tempers the pace a bit. Here Steen sings about dealing with insecurities, “I’m not much to look at and I ain’t much to hear but if you think I loved you, you got the wrong idea” are about indifferent youth that gives a fuck about not to giving a fuck.

As the album progresses Shame’s tracks more and more seem snapshots of the current state of today’s world, which is criticized itself on forthright sung ‘The Lick’. Here Steen seems frustrated with today’s superficial risk-averse culture as he sings that we only look something ‘relatable, not debatable’. The snapshots that Shame take are constantly colored by Steen’s versatile voice. On ‘Lampoon’ and ‘Donk’ he screams and spits whilst on ‘Friction’ he sounds like Ian Curtis and on parts of the ‘The Lick’ he takes the position of a relatively calm narrator.

Together with the vocals Shame craft a sound that is uncompromising but still never becomes unlistenable. As a matter of fact Songs of Praise has a britpop undertone. At certain moments I thought I was listening to Blur or even Oasis. The toxic sarcasm however pulled me out of that dream, dropping me back in the modern world with all of its rough edges.

The album’s closing track is one of those tracks that would qualify as britpop. In a towering seven minutes the band addresses a serious issue about a girl that committed suicide. Alas this song is forgettable. Musically it’s plain tenderness contrasts with the compulsive nature of the other tracks. Songs of Praise takes one track too long to complete if you ask me but that doesn’t make the rest forgettable.

Shame doesn’t try to reimagine punk but they do succeed to put it on the map again, although Priests preceded them last year. Nevertheless Songs of Praise is kind of a refreshing album at this time of the year and offers enough energetic high points to echo through into the festival season. It could well be that Shame’s debut will never make it past this summer because much of Songs of Praise only seem about getting rid of pent-up energy. Come to think of it, there nothing wrong with that, is it?

Further surfing:
Interview with The Guardian
Shame on Bandcamp

3 thoughts on “Shame – Songs of Praise”