Axl Rose is back, and so are Duff McKagan and Slash for a rock ‘n roll reunion everybody hoped for but no-one expected. Not in this lifetime, at least. We were there in Nijmegen.

Guns N’ Roses must be the world’s most expensive coverband. Out of the thirty-two songs played in Nijmegen’s Goffertpark, nine are cover material, making up for about an hour of the extensive three hour long set. It’s not like Guns don’t have original material to spare (where, for example, is their hit song Don’t Cry tonight?). Of course, you could ask the 65.000 attendees tonight and most of them would probably accredit Live and Let Die (Wings) or Knockin’ on Heaven’s Door (Bob Dylan) to the band. In the end it does not matter much, since they do it so well. There are bands that play covers, and there are bands that make that material their own. GnR falls well into the latter category.

Dubbed the Not In This Lifetime Tour, which was their go-to answer to the question if the band (read: Axl Rose, Slash and Duff McKagan) would ever reunite, the tour has catapulted Axl and his gang right back to rock superstardom, raking them in over 200 million dollars thus far. With 65.000 people attending in Nijmegen and the cheapest tickets going for €85 a piece, you can see how that happened. “This had better be one hell of a show,” was my thought. It was. 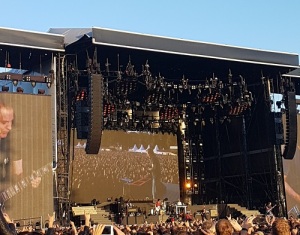 Fashionably late rather than delayed for hours, the band enters the stage just past seven thirty and launch right into It’s So Easy and Mr. Brownstone, immediately setting the tone for the night. This is the Guns N’ Roses you grew up with and sonically, they haven’t aged one bit. Axl has trained himself mostly back into shape, and whilst he does less running about than he used to, he still showcases an impressive set of pipes, hitting most if not all of the high notes. The evening’s first surprise comes in the form of Chinese Democracy, the title track of GnR’s post break-up album (which I maintain is a fine but overproduced album that’s unfairly maligned mostly because of the politics surrounding it). It’s a song which slots in nicely between the rest of the material, and sounds a bit better for Slash handling the guitar. It’s also definitely not a song most people came here to hear, so the onslaught continues with a furious rendition of Welcome to the Jungle and Double Talkin’ Jive before diving back into Chinese Democracy with a more than adequate version of Better.

One of my personal favourites of the evening is the following Estranged, the epic from Use Your Illusion II, and it sounds just as masterful live on stage as in the studio. The long, sweeping guitar parts and the constant tempo changes make this song into a goosebump-inducing highlight in an already splendid concert. Following are Live and Let Die and Rocket Queen before the guys and girl tear into You Could Be Mine, making the eleven year old kid in me who desperately wanted to see Terminator 2 because of the accompanying video clip very happy. Duff McKagan then gets his solo spot with New Rose (by The Damned) before we get the third cut from Chinese Democracy with This I Love.

The second big surprise happens right after Civil War when AC/DC’s Angus Young joins the stage for Whole Lotta Rosie (incidentally getting the biggest round of applause so far tonight) and Riff Raff (“This one’s for the die-hards,” Axl quips. “So, this one’s for us.”). Those who have seen Rose at work with the Australian boogie rock band after vocalist Brian Johnson was forced to step down due to hearing problems know how well he performs the classic Bon Scott songs, and the guys, Rose first and foremost, are obviously having a blast here tearing through these classic songs. After all this unbelievably tight rock ‘n roll, the somewhat chaotic version of Coma is a bit of a letdown, after which Slash’s solo spot (of course including Speak Softly Love from The Godfather) takes the speed out of the concert for a bit. Even Sweet Child O’ Mine can’t properly kickstart the gig back into gear, and Used to Love Her and Yesterdays continue the relative lull before the band rip through Out Ta Get Me with a ferocity you’d expect after the few more poppy tracks that came before.

Another highlight should have been November Rain (preluded by an instrumental version of Pink Floyd’s Wish You Were Here where Slash and Richard Fortus duel with each other). But November Rain tonight sounds hasty and a bit off, and the band sounds as if they’re working their way through the song without their heart being in it. Especially the instrumental apotheosis disappoints. Then it’s time for two more covers, namely Soundgarden’s Black Hole Sun (which doesn’t really work quite as well with Axl belting out the chorus in too shrill a voice) and Dylan’s evergreen Knockin’ On Heaven’s Door, where a huge part is drawn-out to facilitate some audience participation time. A punched up version of Nightrain ends the first portion of the concert.

All around people are clamoring for Paradise City, but Axl decides to test the audience a bit further by starting off the encores with Sorry (from Chinese Democracy) and the god-awful, lazy Patience. The concert is rounded off in style with My Michelle, another cover (The Seeker by The Who this time) and, finally, Paradise City, accompanied by firework during the frantic closing minutes before the band takes their final bow and a crammed 65.000 people try to leave the field all at once.

Guns N’ Roses is hardly the sleazy, dangerous rock ‘n roll band they used to be back in the day, but tonight definitely proved that they still have the chops to deliver a fun evening full of classic material, surprises and covers. With both Axl Rose and the band in fine form, it’s a shame that the concert sags a bit in the middle, but perhaps that’s attributable to the length of the thing. Half an hour of musical interludes and cover songs trimmed off would perhaps have made a better concert. One thing’s certain though: Guns N’ Roses “aten’t ded yet,” and I’m quite curious as to how (or even if) this journey will continue from here.

2 thoughts on “Guns N’ Roses – Not In This Lifetime Tour 2017, Goffertpark Nijmegen”