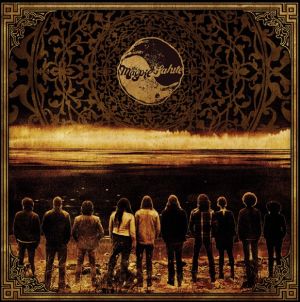 Crowes turning into magpies, can it be done? You better read on if you want an answer to that question.

Exactly one week ago we witnessed a thumping performance of The Magpie Salute at the Bospop 2017 rock festival. The band, formed by former Black Crowes guitarist Rich Robinson last year, de facto is a reincarnation of The Black Crowes. At least so we thought. At Bospop they ‘covered’ much of the soulful blues classics coming from the Crowes. The only moment they stepped away from that was during the cover of The Velvet Underground’s ‘Oh! Sweet Nuthin’, which brought the audience to almost divine heights. The Magpie Salute performed their first concerts this January and were originally only scheduled to perform three concerts, but due to demand, they added news show and eventually decided to tour Europe as well.

According to Robinson The Magpie Salute is not only about playing the songs of old but also is about creating a new sound from their collective R&B, country and spiritual influences. Robinson also dares to take a step further by declaring that: “It’s [the music of The Magpie Salute] freedom, it’s love, it’s loss, it’s pure joy. It’s misery, it’s simultaneously arrogance and vulnerability. It is life.” For now the band is mostly a live outfit that aims to give their songs an  improvisational twist during each gig. So what better way to celebrate the reunion with a live album full with covers.

The 10-piece album is all about pure rock and roll which clearly taps into the rootsy discography of The Black Crowes. The Magpies operate same level playing field as the Crowes once did. The sound is just as groovy and filled rock and blues, which isn’t too surprising because together with Robinson, other former The Black Crowes by name of Marc Ford and Sven Pipien stand in the band’s centre. This unmistakably makes the band sort of it’s own tribute band.

The Magpie Salute not only play live covers of own work as they mostly did on Bospop. On the album much of the tracks are true tributes to their own heroes. Among them are Bob Marley’s ‘Time Will Tell’ and Pink Floyd’s ‘Fearless’ as others like Bobby Hutcherson and The Faces made the cut. Especially on these tracks the band shows its versatility. Bob Marley’s mellow original for example is stretched out into an upbeat gospel melody whilst Pink Floyd’s classic from Meddle (1971) is transformed into a flourishing southern blues track.

The album’s most thick rock track comes from the hands of the 70s funk band War. On ‘War Drums’ the Hammond organ takes control and sets the standard for the 9 minutes of instrumental play. Solos of guitarist Robinson, Ford and Bereciartua sweep in one after the other. The track pumps in an exceptional blues-funk vibe which is impossible to resist when you’re on the dancefloor.

Two nods are made to the past of the core band. ‘Wiser Times’ and ‘What Is Home’ where pulled from the many live sets the band recorded in past year. The built-in chemistry formed during Crowes years comes into play. Here, all the new musicians have to do is to step into the warm bath of confidence. The album’s opening song is the only Magpie original which also was recorded in the studio. ‘Omission’ strongly reminds of the blues rock of the 90s and combines familiar unpolished bluesy guitars, warm organs, a raw soul voice singer who is backed up by some great background singing. Here The Magpie Salute stride forward fast, hopefully hammering in a precedent for the near future.

Admittedly, this The Magpie Salute debut doesn’t differ much from what we have heard about 30 years ago. But we’re not that sour-faced of course so that being said, I believe Robinson and his fellow band members don’t want to turn into a different direction at all. Instead they want to build upon the ashes of a noteworthy legacy. Rooted in the Crowes, Shake Your Money Maker (1990) and The Southern Harmony and Musical Companion (1992), The Magpie Salute manages to rise up like a phoenix. From its foundations the powerhouse of towering southern blues rock is regenerated is and here to stay for generations to come.