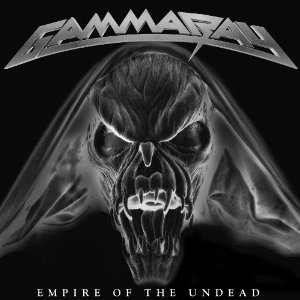 On and on rolls the power metal train, with just about every German power metal band firing shots one after another. And what’s more: all those bands are releasing unexpectedly strong and heavy albums. It’s as if some Holy Spirit of metal has touched these bands, showing them where their roots lie and that there’s no shame in writing fast songs with double bass drumming (I’m looking at you, Edguy and Sonata Arctica). German metal institution Gamma Ray is the next in line.

Every time this particular German power metal powerhouse releases a new album, I am reminded of an interview band leader Kai Hansen once gave, just around the time No World Order was released in 2001. The band had just had a spectacular run with Land of the Free (1995), Somewhere Out in Space (1997) and Power Plant (1999) before a burnt out Kai defended No World Order in advance with “well, you just can’t do anything original in heavy metal anymore.” Despite a few stand-out moments, the record sounded like it had been written and recorded largely on auto-pilot, and the same was true for Majestic (2005) and the quite disappointing To the Metal! (2010), with only 2007’s Land of the Free II being able to convince people that Hansen still had it in him to write more than two awesome songs per record.

Something has happened since then, however. Between drummer Dan Zimmerman leaving the band, their Hammer Studio in Hamburg burning down and Kai having cut his hair to resemble someone out of Dragon Ball Z, Gamma Ray seem to have found a spark of their old glory, resulting in the huge fire that is Empire of the Undead. On this eleventh album, the band sounds reborn, eager and willing to experiment, and the notion that you’re in for something great becomes apparent from the epic opener Avalon, which is easily one of the best songs Kai has written since Rebellion in Dreamland. Starting out slow and brooding, it evolves into a mid-tempo stomper before the up-tempo instrumental section hits, and reverts back to sheer epicness at the end, with subtle (digital) orchestration and really pounding drums courtesy of Michael Ehré closing what will prove a tough opener to beat. The bar is set really high with Avalon, and this song alone is actually reason enough to heartily recommend Empire of the Undead.

Of course, after that grandiose opening track, Gamma Ray venture into more familiar territory with Hellbent and Pale Rider. Hellbent is a typical and fast Gamma Ray track that bears all the hallmarks of the band; the rolling drums, the twin guitar work, the happy-go-lucky melodies and Hansen’s high vocal pitch. Pale Rider, in comparison, plods along at first glance, and only proves quite the solid rocker after having heard it a few more times. The followng three songs are also as classic Gamma Ray as it gets, but somehow things feel fresher and, above all, heavier than they have in past years. The songs have more soul tot hem, and Hansen and co. sound like they are having more fun than they’ve had in a long time.

The first and only ballad between all that sonic violence is Time for Deliverance, which sounds like Gamma Ray doing a cover of a Blind Guardian song. With some added flair and Hansi Kürsch on vocals, it could easily feature on one of the earlier Guardian albums. The album ends on a high note with Demonseed (again, surprisingly heavy stuff), Seven, which quite frankly sounds like it could have come from one of Bruce Dickinson’s later solo efforts, and the frantically epic I Will Return.

Whilst none of the material is miles away from what the band normally does, it is different in that Empire of the Undead features a few more stomping mid-tempo tracks, and a generally heavier sound that on the last few albums. The production is also a lot more raw and devoid of most (if any) excessive polish, and there are some truly great songs to be found here. To be very honest, I thought Gamma Ray was completely burnt out after To the Metal!, but I’m very glad to be proven wrong here. Whether Empire of the Undead marks the start of another run of brilliant albums remains to be seen, but in the meantime we have an hour of great heavy metal for to enjoy. Highly recommended.