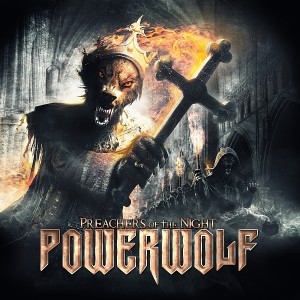 After peaking at number one in Germany’s album charts, and having heard a few snippets here and there, I was quite curious as to how Powerwolf’s brand new album had turned out. I’ve been following the band since their sophomore effort Lupus Dei and was blown away by both Bible of the Beast and Blood of the Saints after that, so the prospect of a new Powerwolf album was already an exciting one. So, is it as good as the last two albums? Let’s find out.

The last power metal band that impressed me by delivering album after album whilst getting better and better with each one was Blind Guardian, but where the Krefelder bards’ albums also got more complicated and layered, Powerwolf almost has the tendency to go the other way. If you thought Blood of the Saints was one hell of a catchy album, you ain’t heard nothing yet. On Preachers of the Night, Powerwolf delivers one earworm after the other, and there is no song on the album that does not stick with you after having heard it only once. It’s Blood of the Saints, and them some.

Starting off with Amen & Attack – which also happens to be the first single off the album – the band grabs you by the throat and does not let you go until Last of the Living Dead is over. And the thing is, you’ll enjoy every minute of it. All the typical Powerwolf elements are back: the cheesy lyrics about all things (un)holy, the unrelenting bass drums, the almost annoyingly catchy hooks and riffs and Attila Dorn’s one-of-a-kind vocal work. It’s all you’ve come to expect from the Germans, and they deliver in spades here. I dare you to listen to a songs like Amen & Attack or a speedy fucker like Cardinal Sin and not be impressed by how tight and slick everything is here. This is a bunch of guys who know how to write a memorable song, and although it’s all your very basic one-fist-in-the-air-and-a-beer-in-the-other heavy metal fare, Powerwolf is quickly turning into the ABBA of metal in that both bands are able to turn the phone book into a riveting sing-a-long.

Clocking in at about 45 minutes, Preachers of the Night isn’t the longest album out there, but it does keep Powerwolf from outstaying their welcome. Because as wonderfully brilliant the material is, the barrage of catchy tunes is unrelenting and can get tiresome near the end, and if you had an hour’s worth of material, things could, and probably would, get boring, mostly because of the lack of diversity. Powerwolf deliver what they can, but this is not a band to capture the imagination with a sprawling twenty-minute epic (don’t let yourself be fooled, the last few minutes of Last of the Living Dead consists of wind and church bells only). For what it is though, Preachers of the Night is well worth it and another highlight in the discography of this one-of-a-kind metal band. Highly recommended.