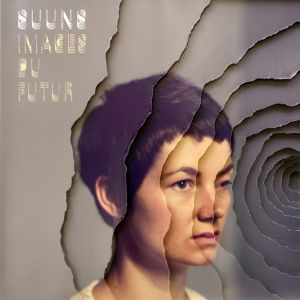 With Zeroes QC (2010) Montreal’s Suuns experienced a marvelous debut. According to various media it was: ‘self-assured’, ‘a gorgeous onslaught’, ‘testosterone-fuelled’ and ‘creeping atmospheric’. I fully agree to these superlatives, for to this day the shrill electronic beats combined with stoner rock of Zeroes QC are still dominating my playlists… and that does not happen very often. Suuns were neglected by many but used this lee to constructively develop themselves as a well appreciated live-act. Naturally a band that displays this much talent has ambitions to reach a larger audience. In an attempt to accomplish this the band released their sophomore album, Images Du Futur, earlier this year.

The first track on Images Du Futur contrasts considerably when its compared to the opener of Zeroes QC. On the latter, Armed for Peace was the explosive crown jewel of the album whilst on the new album Powers of Ten is much more dormant. With a massive wall of guitar play and towing singing, Powers of Ten slightly resembles the work of Placebo. The following track is however a momentary flirt towards to style of Zeroes QC. During 2020 heavy bass tones are luridly accompanied by strange guitar loops and the mumbling voice of Ben Shemie, thus creating a shoegazing atmosphere. Next to 2020 the only other direct reference to previous album is Mirror Mirror. The slow riffs heard in this song are indeed a reflection of the bands short and vital history. From here the album alternately shifts between solid post-modern rock and thought-out indietronica. On Bambi minimal beats and a perky guitar play are weaved together in a track that could be club worthy. Suuns emphasize their compositional agility on Sun Spot, Holocene City and Music Won’t Save You. All of these tracks are fine examples of drawn-out compositions in which tension building and otherworldliness are rampant.

With Images Du Futur the band delivers a decent successor to Zeroes QC. Only this time Suuns decide to keep their powder dry. The compelling synths and exploding riffs are replaced by a modest sense of emptiness that is waiting to be filled. Images Du Futur is a solid an strongly conceptualized album on which the band proves it has grown. On the other hand the new Suuns lacks a proper take off. Experimenting within the margins of electro and rock seems somehow pretentious. By doing so the band takes a risk of being appreciated by ‘elites’ only. Quite frankly, that’s fine by me.