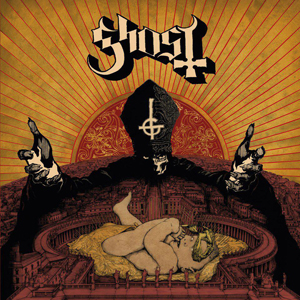 When Swedish metal sensation Ghost released their first single Elizabeth, there was an almost immediate underground buzz. Elizabeth was simultaneously retro and incredibly catchy, and the band itself properly mysterious, fronted by the masked Papa Emeritus II and a host of nameless ghouls playing the instruments. The underground buzz quickly went to what might be called major hype with the release of their debut album Opus Eponymous, an incredibly well made album full of very old-fashioned and evil sounding heavy metal. It was as if the likes of Mercyful Fate, Black Sabbath and Blue Öyster Cult had merged into an entirely new entity.

Since then, Ghost have toured extensively, supporting major acts like Paradise Lost, In Flames and Opeth, and found their star rising quickly. Of course, this would increase the expectations for a new studio effort as well. I distinctly remember album teaser Secular Haze, released onto the internet last December, to be met with quite some hesitation by a lot of people. The metal had gone, and the song, which heavily features a very circus-like sounding organ melody, didn’t sound quite as heavy or ominous as many fans had come to expect after the first album. I also doubt the inclusion of the ABBA-cover I’m a Marionette as a B-side on the vinyl release of Secular Haze helped create a buzz in the by definition rather stoic and reserved metal community.

Anyway, the bands sophomore album Infestissumam has been upon us for nearly a month, and as far as I’m concerned, it’s absolutely stunning. The album sees the band’s departure to a more rock oriented direction. The rough, metallic edges have all but vanished, resulting in a more organic, warm sound. The songs are also far catchier than the songs on Opus Eponymous, but how could one really expect otherwise from a band who have covered pop/rock giants like Abba and The Beatles (I’ll just leave Ghost‘s stunning version of Here Comes the Sun here for your enjoyment)?

Infestissumam starts off on familiar ground with a church-like intro and the still rather heavy Per Aspera ad Inferi, before the full 2013 Ghost is unleashed in full. The band surprises with songs like Jigolo Har Megiddo or Idolatrine, with their catchy hooks and almost pop music sensibility, and I can definitely see how people might be disappointed if they were expecting something heavier. On Infestissumam, the band seems to favour melody over heaviness, and the guitars often take a backseat to a more synth-oriented approach. Centre piece here is Ghuleh/Zombie Queen, a song successfully marrying the new Ghost with the old version; from a quiet but haunting near-ballad to a roaring rock song, this song cannot be described as anything but epic. Other highlights include the second single Year Zero and the brilliantly sinister closing track Monstrance Clock. In all fairness though, there’s nary a dull moment on Infestissumam.

Ghost will continue to polarise the metal community, as they have done since their inception. The retro metal sound is, or was, not for everyone, and the more melodic approach on Infestissumam surely won’t help in bridging the gap between either sides. As decidedly ‘love it or hate it’ Ghost is, though, this sophomore effort is a stunning collection of marvellously melodic, if straight-forward, songs, and I find the songwriting absolutely stellar. I can’t remember the last time I have heard a new album back to front as continually as this, and if nothing else, that’s an accomplishment. A masterful album by a genre-trancending band.