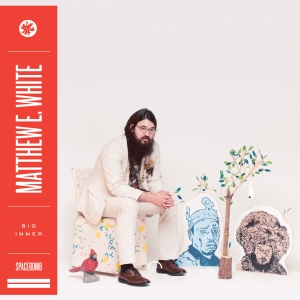 Lately there has been a lot of fuss on the internet about Big Inner by Matthew E. White. In essence it is about this: ‘is it possible for a bespectacled white guy with long hair and a full beard to combine soul, funk, late fifties R&B, psychedelics and folk-gospel….?’ Indeed, there we are, left in a state of total confusion about what some already call ‘the first great album of 2013’. For the archives I have to adjust this last remark. Big Inner was formally released in the United States during the end of summer of 2012. The album was quite successful and appeared on various best of 2012 lists. Although borders don’t seem to matter in the highly interconnected society of today, a global release this January was still necessary for the rest of the world to get acquainted with White’s work. Now this semantic discussion is out of the way it’s time to talk about the man himself and his music.

White, the 29-year-old son of Christian missionaries, lives in Richmond, Virginia (USA) and has been a singer all of his life. He did it all, jamming in middle school, playing a band during high school and starting up an avant-garde Jazz octet called Fight the Big Bull when in college. In these collectives he never had a leading role as a singer. This changed after he established the Spacebomb label. The idea of the label was to form a community around a house band, including White, that brought in other artists who were interested in melting funk, country-rock and soul together. The community gradually grew when various musicians and choristers took part in the daring project. With the release of Big Inner Spacebomb delivered its first product. The album consists of seven tracks and has about 40 minutes of playtime. White’s voice is soft and lethargic and leaves plenty of room for the string, choir and horn arrangements. This space between lead singer and the arrangements is essential. Instead of being a forced and disorienting mixtures of styles the entire album sounds pleasant and comforting. Big Inner contains two main features. Firstly the vintage instrumentation. The enthusiastic Big Love and the modest Will You Love Me will undoubtedly make you think of Al Green and Curtis Mayfield. Also the versatile Steady Pace is swirling with trumpets. This song however ends with a chorus that doesn’t seem fit the deep and warm voice of White. Secondly, spiritual tinted texts are significantly present on the album. These are most likely a reflection of White’s background.  Death, decay, the struggle with the loss of loved ones and faith itself are regularly addressed. ‘Why are you living in Heaven today? Why are you living there now? Stolen away. Baby, taken away’ he sings during Gone Away. Hot Toddies has a more lighter tone to it, the song deals with the biblical theme of temptation, ‘The Lord made lemons and the Lord made me. But the Devil and his demons gave us sweet whiskey’. Not to speak of the final track on which White repeatedly wants to tell you about a certain friend of him.

To conclude, we can agree on the fact that Matthew E. White does not look like an average American soul singer. He does however got soul and takes it to his very own next level. White gracefully succeeds to created his own sound with an occasional minor flaw. Big Inner wonderfully encompasses inventiveness and intimacy making it an ideal album for Sunday morning during spring. But let’s not get overexcited. What happens if spring turn into summer and so on? Will it survive the test of time? If so, this could be one on the best albums of the year. If not, it was at least a delicious spur of the moment which truly deserves a sequel.