When we get the opportunity to rock moderately and hum along to stuff, we jump right on it. So we went to see Crash Test Dummies live in Utrecht.

Canada’s Crash Test Dummies are on their 25th anniversary tour for their hit album God Shuffled His Feet, and because Covid happened that means it’s actually 29 years old at the moment they finally play Utrecht’s TivoliVredenburg. All the way up a million stairs in the venue there’s the Cloud Nine stage. With a capacity of up to about 450 people, it’s clear the Dummies have not sold the place out tonight, although it’s pleasantly crowded by the time the support act hits the stage.

Supporting tonight is a singer-songwriter. A real one. You know the type. Alone on the stage with an acoustic guitar, mumbling through annoyingly meandering songs that begin, go nowhere and then end suddenly. These songs don’t tell stories rather than paint a picture of what the singer-songwriter has been doing, like walking down a pier and buying ice cream because it’s hot and a slight breeze blows over the water. They sing about mundane things but make it feel like something special happened anyway and then throw in a Stone Temple Pilots cover (Sour Girl) for good measure. That’s Canadian singer-songwriter Mo Kenney for you, and although there’s definitely an audience for this type of music and the crowd was surprisingly generous in their applause, it’s not for me. Which is a shame because what Kenney does isn’t bad per se, and in between songs he turns out to be a funny, endearing kid too. But half an hour of intimate acoustic noodling and high-pitched mumble-vocals was not on our bucket list for tonight.

Sounds from the Dark Side do not courtesy clap. You can put that on our headstone thank you very much. We came for Crash Test Dummies. Tonight being a 25th/29th/whatever anniversary of God Shuffled His Feet we came for just that, God Shuffled His Feet. The band’s best known album, which never ceases to amaze in how thought-out and genuinely clever it is, especially in the lyrics department.  Do we know any other songs by the band? Why yes, but not as well. So it’s probably an okay idea that Brad Roberts and his merry band trundle through that entire album instead, starting with the title track. Slightly jarringly, because this album is engraved in our consciousness, the band skips two tracks ahead after that to Days of the Caveman, but that’s because Afternoons & Coffeespoons and Mmm Mmm Mmm Mmm will feature in the encore block, right? Of course they will. 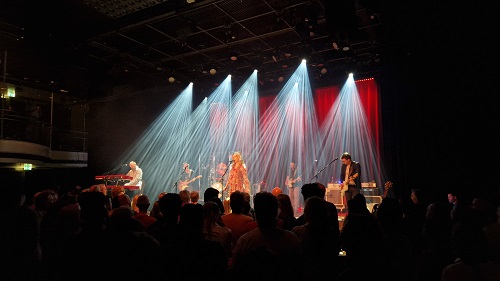 It’s an absolute joy being able to hear these songs live after so many years, and the band, 25+ years later, is still able to deliver the goods. Roberts’ voice is still as deep as it was, and he still (almost) over-enunciates the words in his typical fashion. Ellen Reid’s harmonies are slightly off here and there however, at least at the start, but as the show progresses that turns out to be either my ears deceiving me or a deliberate choice as her vocals later on, especially on lead during The Ballad of Peter Pumpkinhead, are just fine. Anyway. The band bravely and convincingly ploughs on through God Shuffled His Feet up to and including The Psychic, then decides to give the album’s utmost best track Knights and Maidens a wide berth and plunges straight into Coming Back Soon (The Bereft Man’s Song). Everyone has initial opinions but we move on all the same and at the end of the song all is forgiven and forgotten.

What follows is a selection of other known and lesser known tracks from the band’s oeuvre, like Superman’s Song and The Ghosts That Haunt Me from their debut album before we’re treated to Afternoons & Coffeespoons. A particular highlight at the end of the evening is a chilling rendition of the ballad Heart of Stone from their latest (2010) album Oooh La La! It’s a sad song and Roberts announces it as such. An audience member shouts that it isn’t which is quickly rebuffed by a “fuck you it is” by Roberts. The song itself is haunting and intimate and I swear I’ve never heard an audience being so silent during such a quiet song. You could literally hear a pin drop. Of course, the evening ends with everyone humming along to the sounds of Mmm Mmm Mmm Mmm. All in all a good concert by a good band doing what they do best: play their greatest hits and have fun doing so. 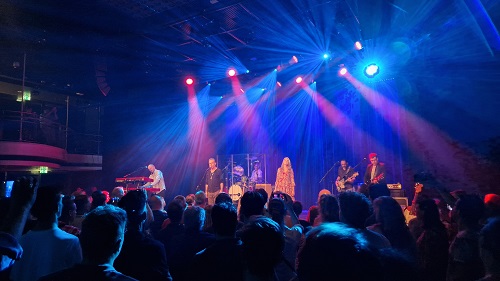