After the disappointing Ayreon album Transitus, Arjen Lucassen is back with a vengeance with his third Star One album.

When Arjen Lucassen released Transitus back in 2020 fans were disappointed, and rightfully so. Envisioned as a soundtrack to a planned film that never got made, it took the Ayreon formula in a more musical-like direction whilst cutting back on the progressive and metal elements. More importantly, for the first time in Ayreon history the songwriting was less than stellar, with more than a few duds on the lengthy double album. Fans were not happy and, in hindsight, neither was Lucassen. But since all his albums are a direct reaction to the one before, the multi-instrumentalist maestro strikes back two years later with a new Star One release, Revel in Time, and I doubt anyone will come away disappointed from this one.

Based solely on science fiction movies and series, Star One is, more than anything, Arjen Lucassen’s heavy metal outlet. And whilst the first two albums featured a meagre number of four vocalists compared to his Ayreon releases, Revel in Time is bursting at the seams with guest vocalists and instrumentalists. The list of personnel is massive, but whilst Lucassen has the tendency to blow his albums up to huge ninety-plus minute proportions, Revel in Time comes in at a lean and very manageable sixty-six minutes. Alright, the CD version out there comes with a second disc with all the songs being sung by other (guide) vocalists, but as those versions don’t really measure up to the proper tracks we can dismiss them as nothing more than some fun bonus material. 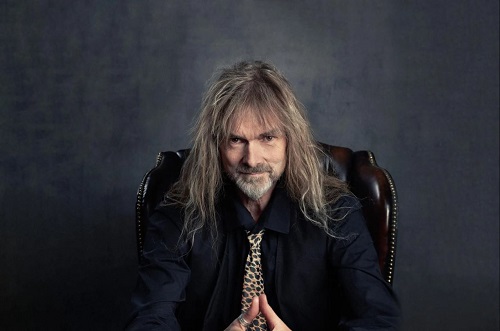 The proper album is excellent though, and could not have started better than with Fate of Man, a fast power metal track based on The Terminator and featuring Unleash the Archers’ Brittney Slayes firing on all cylinders. It’s an album opener so confident that you can almost hear Arjen saying “guys, I’m sorry for Transitus, let me make it up to you.” Slayes is on fire here as is Symphony X’s Michael Romeo during a shredding guitar solo. It’s a terrific start to the thrilling ride ahead. The following 28 Days (Till the End of Time) however is the antithesis to Fate of Man. It’s slow, brooding and bombastic, featuring Russell Allen (Symphony X) as its shining star. It reminds me a bit of Ayreon’s Dawn of a Million Souls in how grand it sounds, but that seems to be just what happens when you put Allen and Lucassen in one room.

The rest of the album measures up to expectations and often exceeds them. Crobot’s Brandon Yeagley stars on the riveting title track, Damian Wilson steals the show on the epic Bridge of Life and Floor Jansen makes A Hand on the Clock a joy to listen to. The only song that doesn’t really work all the way from start to finish is Today is Yesterday, which perhaps gets a little too weird and fragmented for its own good. The absolute highlights on an otherwise already great progressive metal album are The Year of ‘41, which is perhaps the most wholesome and cohesive song on the record, and the long closing track Lost Children of the Universe. The first features Joe Lynn Turner giving it his all, whilst the second is a showcase for ex-Kamelot vocalist Roy Khan, the Hellscore Choir and a tasteful, drawn-out solo courtesy of guitar virtuoso Steve Vai.

Revel in Time is a return to form for mr. Lucassen and a real highlight in his long and mostly impressive career. Like most of his work, it’s a musical roller coaster through the world of metal, rock and prog that displays a lot of love for the classics like Deep Purple, The Beatles and Black Sabbath without getting stuck in that past. It might also be Lucassen’s most versatile record, and considering his expansive oeuvre so far, that’s saying something.