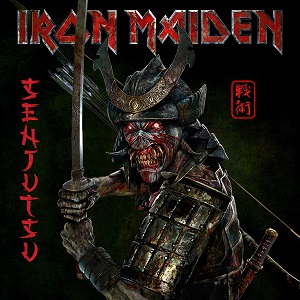 Venerable NWOBHM legends Iron Maiden have returned after a six year break with their seventeenth album Senjutsu. Was it worth the long wait or should they not have bothered?

First thing’s first: Iron Maiden’s seventeenth opus Senjutsu should not have been a double album. Neither should The Book of Souls have been, but that one ran well over ninety minutes in the end so that justifies making it a double album somewhat, even if a couple of tracks could have been lost and/or greatly trimmed. Senjutsu runs for eighty-two minutes, about two minutes longer than a single compact disc runs for. And as has been the case with just about every Maiden album since Fear of the Dark, Senjutsu suffers from bloat. Some instrumental parts are overlong, overly repetitive and I’m sure we could have done without some of the acoustic intro/acoustic outro bits Maiden tends to put on all their longer songs these days. A really tight seventy minute album exists in this eighty-two minute monster.

That being said though, there is a lot to enjoy on Senjutsu. The opening title track is dark and heavy, with a moody chorus and almost martial drumming. We got treated to the first single The Writing on the Wall a while ago, and whilst the faux country vibe is a bit unusual for the band, it really is an absolute earworm of a song, where a lot of fun stuff happens, especially when it comes to the guitar department. It’s bouncy and folky and it has a few extremely good solo spots in the middle. The second single Stratego is even better, with that trademark Maiden gallop, a really catchy chorus that’s bound to do well live and some great doubled vocal lines by Bruce. So far, so good, but then comes Lost in a Lost World, clocking in at nine minutes and thirty-one seconds. The intro alone lasts two minutes and is wonderfully moody before it changes to a proper rocker with staccato riffing and a nice bridging section. The chorus, however, sucks balls, with Bruce singing Lost in a Lost World a few times. The instrumental section after that is fine before they return to the chorus. The song then ends with an acoustic outro where Bruce sings along with the guitar melody. That alone is two lost minutes, right there. We’re now in single album territory.

Days of Future Past fares a lot better then, a snappy, speedy rocker with a great chorus and some great solos. The Time Machine also suffers from Maiden’s addiction to long intros and outros, where the song begins with a quiet intro and ends exactly the same. There’s a good song in between with some good folky Dance of Death vibes. There’s a great song hidden between three minutes of acoustic noodling. Darkest Hour is a power ballad that reminds of Bruce’s solo stuff. It’s wonderfully moody with some great melodies and a melancholy atmosphere you don’t get from Maiden that often.

The last three songs have a combined running time of over half an hour and all of them are penned solely by Steve Harris. When I first learned of Harris somehow writing three epics to end the album on, I wasn’t sure it was such a good idea. Most of Steve’s modern epics tend to be overlong after all, being bogged down with that acoustic intro and outro schtick and too much repetition in between. Death of the Celts managed to take away my fears in one fell swoop though. Clocking in at ten minutes, it’s the shortest of the three songs and as expected from the title has some strong folky vibes that remind of Virtual XI’s The Clansman. Especially the instrumental middle section is as strong as they get and if you close your eyes you can already see Janick Gers prancing and swirling over the stage. The Parchment took some time getting used to. Starting out (and of course ending with) a quiet instrumental part that evokes an eastern atmosphere, it quickly turns into a confident mid-tempo rocker that keeps building tension before it hits full speed at the ten minute mark with a few searing guitar solos. Ending Senjutsu on a high note is Hell on Earth and it could not have a better closing track than this. Again and predictably following the same format of starting slow, building up to speed before slowing down at the end, it’s definitely one of the better songs Harris penned in a while. The familiar gallop returns again and it has this joyous, bubbly energy that the best Maiden songs have, and a stellar performance by the entire band. The song shifts and coils and continues to evolve instead of repeating sections and it’s definitely the highlight on Senjutsu.

We should be glad that Iron Maiden is still around to release new music and that the quality of that music is this high. It’s a definite step up from The Book of Souls and even if there is still fat that could have been trimmed on Senjutsu if only to make it into a single album instead of a double one, but it’s a thoroughly enjoyable record all the same. If this happens to be the last album the venerable British legend releases, they’ve gone out on an absolute high. It’s not as strong as 2006’s A Matter of Life and Death which was an absolute masterclass of focus and easily the best of the post-reunion albums (fight me), but it’s definitely up there and will probably continue to grow on me in the weeks to come.

One thought on “Iron Maiden – Senjutsu”