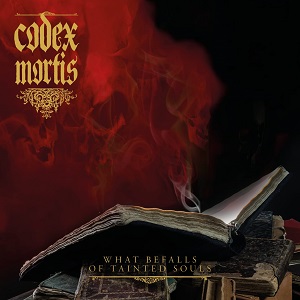 Dutch death/black metal band Codex Mortis is about to unleash its debut album upon the world on the second of April and we were eager to check it out. Let’s dig in.

What Befalls of Tainted Souls is the debut album by Dutch extreme metallers Codex Mortis. The band consists of (ex) members of, amongst others, Bloodphemy, Bodyfarm, Phlebotimized and Funeral Whore, and they claim to be inspired by Emperor, Cradle of Filth, Hypocrisy and Dissection. The Cradle of Filth influence eludes me, but you can definitely hear traces of the other bands, especially when it comes to the more complex riffing here and there. There are other things to pick up on but we’ll get to that later.

What’s great about Codex Mortis’ debut is that the band wastes absolutely no time to get going. What Befalls of Tainted Souls crashes out of the gates kicking and screaming with Avernus. There’s no mock orchestrated intro to ease you in, no ramping up whatsoever; from the first second all hell breaks loose and utter chaos is unleashed. At least, that’s what it sounds like for the first thirty seconds. It’s a bold start to an album that definitely caught me off guard on the first listen. The band hits the ground running and sets the stage for what we roughly can expect for the next forty-odd minutes. It’s a kick in the proverbial teeth and it works really well here. Avernus dives straight into Beguiled by the Devil, keeping the speed up before things slow down to a more manageable pace on The Drowned and Where the Skulls Reside.

You can hear these guys are talented and experienced. The songwriting is tight and filled with little flourishes; a drum fill to make you sit up and notice, a few vocal lines that differ so much from Dirk Willems’ usual screams that you’re wondering what’s going on, like how Where the Skulls Reside ends on a really Paradise Lost type note, with gloomy vocals creating a morose mood. The lightning fast It Was Satan That She Serves reminds me of old Swedish black metallers Marduk in its speed and ferocity. Fallen is another highlight with its driving rhythm and it’s solemn, keyboard-laden outro. The majority of songs have little twists like that, really enhancing the already more than adequate mix of death and black. And if that doesn’t help, there is always Jeroen van Aernsbergen and Arjan van Dune, who garnish the entire thing with all sorts of interesting riffs, licks and twin guitar parts.

Codex Mortis’ What Befalls of Tainted Souls is nothing if not interesting. Its starting salvo of Avernus and Beguiled by the Devil give off the impression that this is your run-of-the-mill slab of blackened death but things improve greatly beyond those two songs, and the band manages to keep the quality high until the very end. Running for just under forty-five minutes, Codex Mortis’ debut is snappy and concise and just long enough to have you wanting for more without getting stale. Add some really good musicianship to the mix and a vocalist who is able to vary things up between his grunts and screams and you’ve got an extreme metal debut on your hands that I can’t help but heartily recommend.