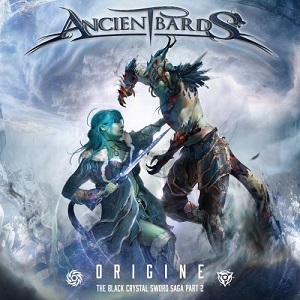 Ancient Bards is back for a fourth round of symphonic power metal. We had opinions.

There’s something wrong in the Kingdom of Somewhere and it’s up to People with Swords™ to save it. Or something along those lines. Look, I’m sorry, I have no clue as to what’s going on in Ancient Bards’ now four albums spanning fantasy saga, to which Origine – The Black Crystal Sword Saga part 2 is apparently a prequel. Like fellow Italian power metal mongers Rhapsody (with or without Fire or the Lione/Turilli prefix for that matter) and their Emerald Sword Saga, this entire thing screams Cookie Cutter Fantasy Guff to me, but I don’t mind one jot as long as the music’s good. And that’s definitely the case here.

Having already name-dropped Rhapsody once should be enough, and whilst Ancient Bards is no copycat, they sure have taken their cues from them when it comes to symphonic power metal. From the speedy guitar solos to the choirs and the over the top bombast, this is real Italian cheese, and it’s good. And if you’re not up to speed on the story there’s no need to worry because there’s a guy right there in the intro telling you what’s up in his best Booming Narrative Voice. Now, with three albums already under their belt, Ancient Bards know how to write a power metal song or two, and they dive right into the cheesy goodness with Impious Dystopia, a corker of an album opener that sums up what this album is going to be all about: speedy power metal with some neo-classical guitar-noodling, choirs, keyboards and so on, all of this led by Sara Squadrani on vocal duties. 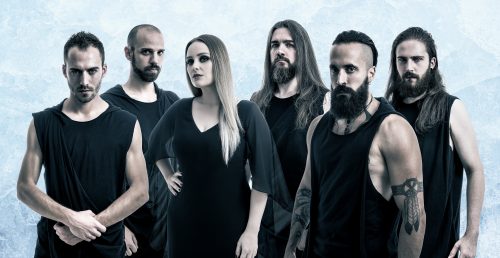 Squadrani is a wonderful singer for a band like this. Far from the typical operatic voice that’s become quite to synonymous for “female fronted metal”, she has a far more pop-ish vocal style with the slightest hint of soul in there. There are small moments where she is inches away from showboating on the vocal scale all Aguilera-style, but it never gets too much. Talented as heck, she can sing her way through a power metal track one minute and you wouldn’t be surprised one bit if she belt out Frozen’s Let It Go the next. She’s great, and one of the great charms of these Italian cheese-ballers, and she gets a lot of room to shine on Origine. And just when it gets all too syruppy, you have guitarist Simone Bertozzi growling something harshly into the mic.

There are some wonderful songs on Origine too. Fantasy’s Wings plows through a great chorus and some epic orchestration, Aureum Legacy has terrific vocal lines for Sara, and the bombastic power ballad Light is a showstopper in all the right ways. Orchestral interlude The Hollow is one of my favourite musical things of this year; with swelling orchestrations and choirs it’s the soundtrack to an epic fantasy movie that hasn’t been made. It’s magical, riveting stuff. The great highs on Origine, on the other hand, make the lows seem much lower than they actually are. Oscurità disappoints with a rather mediocre chorus and lack of direction, and the fifteen minute closing track The Great Divide suffers from a disturbingly slow start taking up half the song. Cutting that one down to size and removing Oscurità in its entirety would have made for a much tighter album instead of the slightly overlong one we got instead, but mea culpa.

At the end of the road Origine is a still pretty good album that is slightly frustrating in that it could have been a minor masterpiece in the genre. When Ancient Bards are on a roll, they can really hit a homerun, and the good songs on here are nothing short of excellent. It’s an hour’s worth of music that could easily have had fifteen minutes cut off and been a better one for it. Still, Origine is warmly recommended to fans of the band and the melodic power metal genre overall.