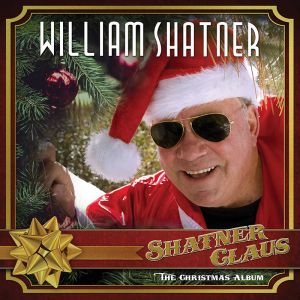 Christmas music on Sounds from the Dark Side? You better believe it, courtesy of Starfleet captain James T. Kirk.

Confession time: I’m a strange guy in that I actually enjoy William Shatner’s musical outings. The Transformed Man, where Captain Kirk reads Shakespeare over classical music and does some fantastically over the top covers of Dylan’s Mr. Tambourine Man and The Beatles’ Lucy in the Sky with Diamonds is a marvel of well-executed kitsch. His dead-pan rendition of Elton John’s Rocket Man borders on satire and never ceases to make me smile. I still regularly break out 2004’s Has Been and seriously consider that a very good album and the highlight in Shatner’s musical career. Seeking Major Tom is a great collection of covers of well-known rock songs, delivered again in the Shat’s dead-pan voice. It’s great, silly fun. Ponder the Mystery, which I reviewed on here, was a more than decent prog-rock album and I’m sad to say I still have to hear his 2018 country album Why Not Me?

All of those albums, somehow, bring us to this: Shatner Claus. It’s a Christmas miracle it has taken him this long to realise that this was a thing we did not know we needed in our lives, and for some reason he managed to recruit, amongst others, Henry Rollins, Rick Wakeman (Yes), Ian Anderson (Jethro Tull), Billy Gibbons (ZZ Top), Mel Collins (King Crimson) and Iggy Pop to undertake the Christmas journey with him. It sounds horrible, and for some reason it isn’t at all, because you can already hear Shatner’s typically strange intonation of Little Drummer Boy’s pa rum pum pum pum in your head. The Shat and his drum. It’s stupid, it’s silly and at times it’s almost cringe-worthy like just about everything Shatner has done in the past twenty years, but once again it works for some reason. This is one of those albums you come to with a predisposition to hate it and you just can’t. Well, maybe you can; I seem impossible to.

You know what it is? You know the songs and Christmas songs are already strangely contagious, and to have Shatner talking over the tunes you’ve known so long just seems right. The man has an immeasurably soothing voice, which makes stuff like Little Drummer Boy or Twas the Night Before Christmas a genuine joy to listen to. The harder rocking stuff is fun as well of course, with some great versions of Jingle Bells and Run Rudolph Run shaking up things just when you tend to nod off. O Come, O Come Emmanuel is brilliant, with great orchestration and a female vocalist in order to conjure maximum goosebumps.

Christmas. Presents. Hugs and kisses. Eggnog. The Shat goes on about all of those. Especially eggnog for some reason. And just when you think he has had a little too much of it, things pick up again. Rudolph the Red-Nosed Reindeer starts out jolly whilst also making you wonder why Billy Gibbons is on there before becoming a full-on Texan rocker. One for You, One for Me surprises with its wonderful heavy prog-rock instrumentation. The only real disappointment is Silent Night, where Shatner and Iggy Pop try to out-croon each other. But hey, almost every good album has to have a stinker on it, right?

That’s right, I just called Shatner Claus a good album. Because it is. It’s big, stupid fun executed really well. It’s silly and campy but the music’s good and you get the sense that a real effort was made to try and do something different with most of these songs. On top of that, there is something spellbinding about Shatner wishing you feliz navidad and a merry Christmas. So, to cap all of this off and get to the food, drinks and, perhaps, eggnog, we here at Sounds from the Dark Side would like to join the dear old captain Kirk in doing just that:

Have a very merry and safe Christmas and a wonderful 2019.