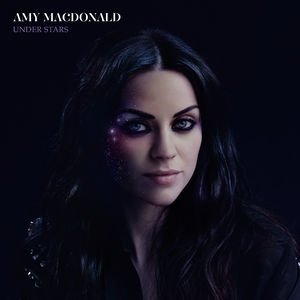 Under Stars is the fourth album by Amy Macdonald, and the first in five long years. Let’s see how it stacks up and whether the wait was worth it.

It’s been nearly five years since we last saw new studio material from Scottish singer/songwriter Amy Macdonald, and ten years already since she rose to fame with her debut album This is the Life in 2007. Whilst follow-up A Curious Thing (2010) was a bit uneven, 2012’s Life in a Beautiful Light showed the singer/songwriter back in fine form, matching (and outmatching at times) the quality of her debut. With Under Stars, we get an album that’s a little more serious in tone, and is perhaps Amy’s best, most coherent record yet.

Kicking things into gear is Dream On, an immediately catchy, infectious tune that was understandably chosen as the album’s first single outing. It’s an upbeat and fun song and a splendid way to start, followed by the much moodier title track in what quickly becomes a habit for the album, to counter each upbeat song with something darker. It makes for a varied album, and it’s the slower, moody stuff where Macdonald excels this time, showing how much she has grown as a songwriter.

Nowhere is this growth more apparent than in Down by the Water, a slow, brooding song that swells as it goes on. There’s a gospel sensibility here that reminds of the darker Springsteen albums (i.e. Nebraska, The Ghost of Tom Joad). It’s a track that screams for immediate relistening and, for me, is the arguable highlight on an already very good album. The same goes for the closing combo of Prepare to Fall and From the Ashes. It’s more serious fare than we’re used to from Amy Macdonald, and it makes for much more mature album than we’ve heard by her so far.

You’d be forgiven in thinking that material like this makes the more uplifting songs feel inconsequential in comparison, but that’s luckily not the case. The aforementioned Dream On is great and sticks in your head after the first listen. The same goes for Leap of Faith, courtesy of a very strong chorus line and some fun guitar work. The only song I was not instantly sold on is The Rise & Fall, and that’s largely due to the repeating lines of together we rise and united we fall, which sticks out as bad writing in an otherwise fine song. But that’s nitpicking, and the song does grow on you, even when it’s not the finest moment on Under Stars.

In the end though, Amy’s fourth album is a treat from front to back, and probably her best album thus far. Five years in the making, it’s clear that this is a labour of love. Clocking in just under 40 minutes, it is also a very lean album with all the fat cleanly cut and left on the cutting room floor. This is how you make and edit a good album, and one can only wish other artists would follow suit and learn how to self-edit (I’m looking at you, Metallica). Whether Under Stars can vie for a place in the lists at the end of the year remains to be seen, but for now it’s a highly enjoyable album that already has multiple spins on my turntable under its belt. Quite recommended.

3 thoughts on “Amy Macdonald – Under Stars”