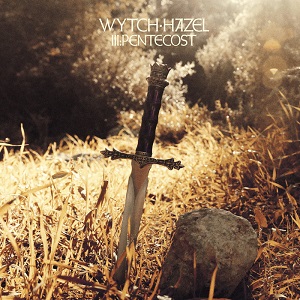 “Now that’s some straight-up Thin Lizzy / Wishbone Ash worship right there.” That’s the first thought that went through my head when I first heard Wytch Hazel’s sophomore album II: Sojourn. I may even have said it out loud, especially after seeing the cover art which is almost a companion piece to Wishbone Ash’s Argus album cover. Sojourn was impressive enough to also warrant a listen to the band’s debut, and whilst Prelude is arguably even a little tighter in the songwriting area, these are both great albums that fans of the aforementioned bands will find hard to fault. The band’s mentality to not change what isn’t broken continues on III: Pentecost, which turns out to be another deliciously old-school slab of classic hard rock.

Musically, you know what to expect by now. Classic twin guitar rock with a dash of metal and a whiff of Jethro Tull-style folk. If you already know the band a little bit better, you also know you’re in for a whole lot of Jesus, which might put some people off right from the start. This solicits all sorts of fun reactions from a lot of die hard metalheads who are experiencing conflicting emotions from hearing the other side of religion, something most of them already consider a fairy tale in the first place. Main songwriter Colin Hendra is undoubtedly a very devout person to say the least and appears to write his music and lyrics from the heart and I say more power to him. Not being decidedly in favour of or against religion as a concept, I don’t think I’m bothered enough by having some Jesus in my album collection next to all the dragons, robots and of course Satan himself to make a big deal out of it, but consider this a warning.

III: Pentecost is 42 minutes long and counts ten songs, which is about as perfect an album length you can have in my book. It shows self-awareness in both the songwriting and editing department and gives the material a sense of immediacy. Here, no drum beat is superfluous, no guitar solo too long or self-indulging and no song longer than strictly necessary. One might argue that the instrumental Sonata could have been cut but it makes for a nice interlude so I’ll give it a pass. Some may hate it, some may love it, but Sonata notwithstanding there is not a bad song on III: Pentecost. Every song counts and when a band opens an album with four songs as good as the opening salvo here I’m willing to forgive a potential misstep along the way. Not that there are any missteps to reckon with here; this is one of those rare examples where every song is just that fucking good. Wytch Hazel is on top of their game here, making sure that what they’ve written and recorded is, at least for the moment, the absolute best they can, and it makes for a riveting listening experience.

Between all this superb stuff there are of course some personal favourites to be found at the moment. The upbeat I Am Redeemed, for example, which incorporates some really tight twin guitar bridges to up the tension. Archangel might be the ultimate earworm here, and you’ll find yourself having a hard time getting its ridiculously catchy chorus out of your head any time soon. Closing track Ancient of Days is perhaps the heaviest track on the record, with a main guitar lick that’s straight out of Iron Maiden’s Ghengis Khan book of songwriting. It’s not an exact copy, but it’s dangerously close to it; let’s call it an homage, be it intentional or not.

The sound on III: Pentecost is crisp and crystal clear, although I’d wish the bass was just a tad more up front in the mix, just to add a bit of extra weight to the songs. In the end it’s nitpicking though, and it’s not as if Andy Shackleton is buried so deep in the mix that he’s completely inaudible. Another slight, personal complaint I could make is that after three excellent albums with songs all clocking in neatly between three and five-plus minutes I’d love to see them try their hand at something more lengthy and epic. I’m sure that by now Hendra has the songwriting chops to pull off a ten minute epic, but keeping things short and sweet could be a deliberate choice made here. What I do know is that Wytch Hazel’s third is a triumph that further drives home the fact that we’re dealing with one of the very best “new classic rock bands” around right now. It’s also their best album so far and if you like your rock folky and full of good twin guitar hooks and licks, you owe it to yourself to check this one out.