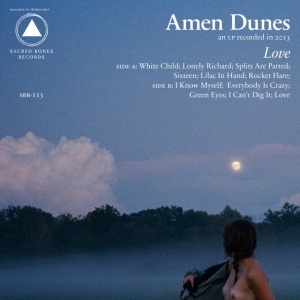 What would you do if you were a singer-songwriter and your first album under your own name was marked by the media as one of the worst album’s of the year? Well, I know what I would do: I would flee my home town and get a job as a carpenter somewhere far away and maybe, just maybe I’d go back after while, hoping everyone forgot about my failure. I sure as hell wouldn’t dare the pick up my guitar in the years following. But hey, that’s me and my story is fictional.

The story of Damon McMahon, a former member of the ‘one-day-fly’ rock band INOUK isn’t. The Philadelphian (USA) native released a solo debut in 2006, washed-out and fled into the mountains for some good old fashioned alone time. McMahon however didn’t turn his back from music and thus decided to put mind over matter and continued recording. It was in these mountains he first recorded dark acoustic songs under the name of Amen Dunes that were mere for personal use. As the years followed McMahon moved to China and back to the States again, while still recording introvert indie song but now also began releasing work under the name of Amen Dunes. The albums Murder Dull Mind (2010), Through Donkey Jaw (2011) and the vinyl-only collection of unreleased songs The Spoiler (2013) were a considerable successes but didn’t deserve the title of comeback albums either. Success though isn’t were McMahon is after. According to the man he lives for making intimate music and is grateful for anyone that listens. A lesson he learned the hard way perhaps? Luckily for McMahon the number of people who were looking forward to Amen Dunes third full album, Love, is ever growing.

Amen Dunes’ music on Love is just as spacious as the album’s front cover suggest and at first the copious reverbs even reminded me of a random Fleet Foxes album. Yet, a references like this would do McMahon short. Love counts eleven tracks that each center McMahon’s characteristic sharp voice. His singing can best be described as a mixture of Devendra Banhart and Chad vanGaalen. For example, Banhart’s intimacy is best heard on ‘Lilac In Hand’ and ‘Green Eyes’ whilst vanGaalen’s firm and fragile manner of singing comes into play on ‘Splits Are Parted’ and ‘Sixteen’. McMahon’s vocal range is wide enough to take up the best from both sides without sliding into psychedelic escapism. His singing instead lays the foundation of an own and unique style, that I would say is in essence about feeling alive in surroundings that are safe to explore. On Love, the lyrics are a trip to the horizon and back as well. On many occasions McMahon seems to be seeking something deep within. ‘White Child’, the album’s first track, starts with some of out-of-tune guitars strumming and the weighty words: “From my head to my eyes set to the sky. Give back and knock my eyes, there a devil through his both eyes”. And in this fashion he continues throughout the album, addressing personal themes such as uncertainty, confusion and wonderment. Only the obvious titled ‘I Know Myself’ really touches the ground and elaborates about ending a relationship after an introspective journey to one’s self. Of course Amen Dunes is more than just one name. Love was made in close collaboration with other renowned musicians. Bon Iver’s bass saxophonist Colin Stetson and Godspeed You! Black Emperor’s Efrim Menuck (who also co-produced the record) serve up some estranged saxe lines and gritty guitar play on ‘I Can’t Dig It’. Whilst Elias Bender Rønnenfelt, frontman of the Danish punk formation Iceage, appears on ‘Lonely Richard’ and some other songs with a few floaty and simple chord variations. This sort of simplicity is added to the aforementioned  spaciousness sound of echoes and harsh delays. As you’d might know spacious production is a very common thing in the indie scene nowadays, so that makes Love a not very innovative listening experience. On the other hand, if you give it some time, the muted openness Amen Dunes creates becomes rather appealing at a certain moment. Or have I been staring at the album’s front cover for too long?

Love is a work of devotion coming straight from McMahon’s heart and is an essential record for those among you who are currently caught up in a complex self-healing process or for those who are just in a philosophical mood. Therfore this album will be picked up by todays faux-romantics scene. On an elemental level a job well done by Amen Dunes if I may say so. On the downside Love isn’t the fresh piece of work I was hoping for. The music is only there to make room for McMahon voice which makes the whole album sadly a bit one-sided.  So, although I believe McMahon devotion is sincere, the new Amen Dunes just never seems to burst into life.

Amen Dunes will visit the Dutch ‘Le Guess Who?’ festival on November 23th 2014.