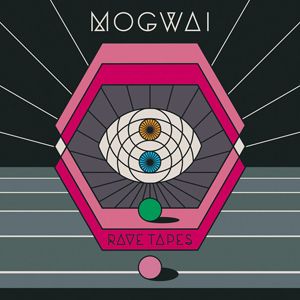 Twice I forgot about Mogwai’s existence. I first got acquainted with the band after picking them up during a BBC Peel Session. At the time Come on Die Young (1999) and Rock Action (2001) were not to miss albums. Yet shortly after that, they disappeared from my radar for unknown reasons but reappeared a decade later with Hardcore will never die, but you will (2011). Luckily I was still there to enjoy the instrumental contents of ‘Hardcore’ that in the end never nested on my playlists. Again I had no good reason for this to happen, but it did somehow. Musically Mogwai always was worthwhile to listen to. So a few weeks ago the grey, black and pink cover of their new release, Rave Tapes, caught my eye and made me, shamefully, think about Mogwai again. Let’s say three time’s a charm, all right.

Mogwai has been around since ’95 and recorded several albums and soundtracks which are mostly full of lengthy instrumental rock. Over time the band’s musical style never changed radically. Yet they do manage to offer something new on each album in the wider margins, sometimes experimenting with synths, classical instruments, vocals or electronica. The Scots are praised by the public for their creative urge to experiment and their ability to interchange the scope within their arrangements. This constant performance also caught the attention of fellow artists. Musicians of renowned bands, such as Super Furry Animals, Snow Patrol and Slint, where and are more than willing to associated themselves with Mogwai. With Rave Tapes, the band is expected to consolidate this impressive track record. Now let’s check it out, firstly by gazing at the cover once more…

Rave Tapes front is somewhat odd and similar to Sarah Yu Zeebroek’s artwork for the Bed Rugs EP, at least when it comes to the use of pastel colours, eyes and triangles. ‘Otherworldly’ is again the word that comes into mind, however this time in a fixed manner. Looking beyond the geometric recurring octagons, Rave Tapes counts ten tracks that have an average playtime of 4 minutes. This alone is a worrying sign of obedience that doesn’t suit instrumental band like Mogwai. Musically Rave Tapes just never seems to take off. This does not automatically mean that the content is of inferior quality. Early on, the track Simon Ferocious hits you with some full heavy electronics and Hexon Bogon releases a massive wall of hi-res post-rock from your speakers. Thing is, we all heard it before. What disappoints most, is the lack of of the soft and loud dynamics within the tracks. Instead the band now excels in a balanced form of solidity. Remuderded sounds like an bloated classic from Kraftwerk, whilst the hazy vocalled Blues Hour is simply too obligatory arranged. Only at a few points the album is able to grab the attention, best example is Repelish, on which a sampled monologue explains about a perceived satanic message that is heard when playing on Led Zeppelin’s Stairway to Heaven backward. Mogwai accompanies the narrator while he keeps rambling on about Satan. It’s funny track, in an annoying way. Also No Medicine for Regret is fairly nice because of its meditative nature. Nonetheless this sort of lighter points do not weigh up to the absence of experiment.

Mogwai’s eighth album is all about consolidating. The band doesn’t take any risks to innovate in any margin and by doing so also leaves room for bands such as heavier The Black Angels and trippier Föllakzoid to fill this gap. In a way this is pity, because exploring the edges of rock music was one of their biggest assets to the scene. If you don’t want to be surprised, this release is a safe buy. Mogwai does conform itself to their own standards by composing well thought out music of a constant level. So, there is quality enough to enjoy. However in its core, Rave Tapes misses a tangible purpose, and the fifty minutes it takes the album to complete, tick away into oblivion.

Mogwai – The Lord is Out of Control (Official Video)