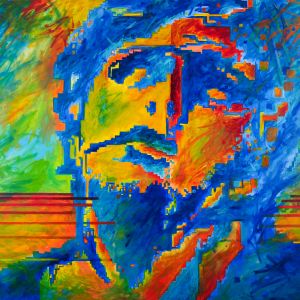 Somewhere in the murky depths between jazz, prog rock and post-punk, we find the Texan-based outfit Liquid Casing, who have just released their brand new effort A Separate Divide, a thought-provoking musical work about borders and illegal immigration. It’s a difficult topic to make a concept album about, and one deserving an intricate, well thought out sonic frame. Now, many things can be said about A Separate Divide, but an easy album, this is not.

It would be easier to describe Liquid Casing’s new effort as a monumentally difficult album to listen to, not unlike the nature of the topic on which the band tries to convey its thoughts. In just under sixty minutes, A Separate Divide darts from genre to genre in what’s best described as a genre-transcending work of art, and therein lies the album’s biggest strength, as well as its biggest problems.

During the course of the nine songs, A Separate Divide will either fully enthral you, or drive you utterly insane in the process. What drives most of the album is a sort of fusion between noise rock and jazz, which at times is eerily reminiscent of bands like Godspeed You! Black Emperor or Mogwai. The songs trudge on regardless of what’s happening elsewhere, with the material obviously thriving on a well-calculated sense of dissonance. There’s a huge wall of guitars here, with keyboards and sax fighting for equal attention, trying to break it down, whilst the drums try to counter anything and everything in order to either annoy or confuse the listener.

It makes for some stunning music, which cannot be broken down into neat, bite sized chunks. No, A Separate Divide is one of those albums working best as a whole, with the songs being played back to back until the album ends. This, however, also makes for an album which requires a lot of effort to get into, and the undivided attention of the listener. This is not something you play on the background when you read a good book, but an hour’s worth of music screaming for your attention. When it does grab you though, it won’t let you go again until the last tones of Riot Path have died away.

A Separate Divide is an impressive album that is in some ways more a work of art than a proper musical product. Liquid Casing does a lot right in this hour, and creates a varied and multi-faceted soundscape, of which the long For a Memory Erased is the epic centre piece and undisputed highlight. It’s also an album you will either love to death, or will be wholly unable to get in to. A Separate Divide is not for everyone, but does reward the more persistent of listeners, and is well worth checking out at any rate.