Every relationship needs a healthy break sometimes, and after a prolonged one with Dutch sympho metallers Epica we’re ready to give them another try.

Epica has always been one of those bands I have a serious love/hate relationship with. Back in 2003, I loved The Phantom Agony, the band’s debut. It did that same beauty and the beast type symphonic metal that Mark Jansen was already famous for with the then recently disbanded After Forever, only better. Follow-up Consign to Oblivion upped the ante in the orchestration department but still remained concise at an acceptable fifty-two minutes. It was after that, on The Divine Conspiracy, that things went wrong. The choirs became bigger, the orchestration more ostentatious and the album lengths spiraled out of control into the seventy minute range and have stayed there to this day. Knowing Jansen’s tendency to have things balloon into disproportionate sizes this is of course no surprise; here we find a man who started Mayan, a death metal band that somehow grew into a fifteen member behemoth. 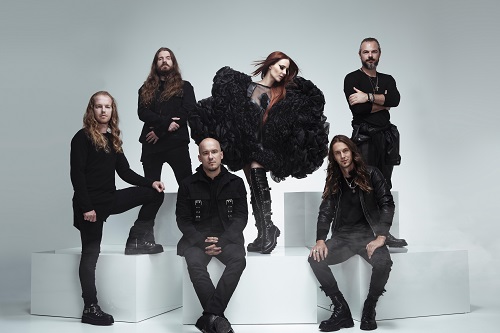 I’ve seen Epica being described as a band that would be a lot better if they’d have half their equipment stolen and that’s funny because it’s at least partly true. If you cram huge orchestrations and choirs and God knows what into every damn song, it can grow into too much of a good thing. I have seen the band live a number of times and have walked away at least twice because it was too much. Also, Simone Simons’ operatic wails became grating halfway through and you can only look at Coen Janssen’s stupid fucking curved keyboard before you feel like you might explode with rage. That curved abomination aside, here I was thinking I hated this band only to find out that I happen to own its entire discography, save for their 2016 effort The Holographic Principle. How’s that for some egg on my face? So I went on a crash course in both their last album and the The Quantum Enigma EP to bring myself up to speed and tell you exactly what I think of Epica’s eighth album.

Whatever you might think of Epica, you can’t deny either the quality of the music or the band’s ambition. Omega is another sprawling work that lasts seventy minutes and like the last two albums you can probably expect an EP with B-sides somewhere later this year. Looking at the structure of the thing, you might even describe it as formulaic. Things start with an orchestral intro complete with swelling choirs and lofty musical promises and is followed by an uptempo banger. Halfway through the album there is a huge epic in Kingdom of Heaven Part 3 – The Antediluvian Universe, lasting almost a quarter of an hour. There’s your bittersweet ballad in the form of Rivers and things close out with the title track. In that respect, it’s an Epica album by the books. It’s also catchy, insanely well-paced and doesn’t get boring at all despite being this long.

What helps immensely here is the outstanding flow of Omega. Constantly moving from faster songs into more mid-tempo work and changing things up here and there with a ballad, an epic of a choir-based rocker (Seal of Solomon) works wonders over the entire seventy minute length and makes Omega feel shorter than it actually is. Also helping are the production values. With a crisp sound, the bombastic choirs, over the top orchestration and technical metal come together really well to form a truly cohesive work. The musicianship is stellar as it always has been with Epica. Guitar solos fly by left and right, blast beats will torment your speakers and the vocal work by both Simone Simons and Mark Jansen is as good as always, even though Simone still has a mid-range which I find to become rather grating after a while.

Still though, with eleven songs of this much quality there is a lot to enjoy on Omega and no fan of the band will be disappointed. It’s not as riveting as their Epica vs. Attack on Titan Songs EP they did a few years back but it’s a definite step up from The Holographic Principle, bringing a more cohesive collection of songs to the table. It might not be album of the year material but it’s close and other than that things can get too much, too massive and too bombastic on occasion it’s hard to lob any form of real criticism at Omega.