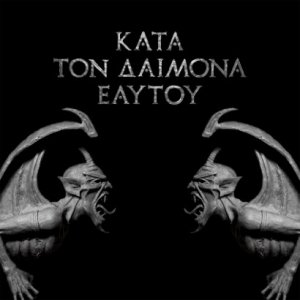 Greek black metal pioneers Rotting Christ have certainly evolved over the years. Starting out as a grindcore band in the late eighties, the sound gradually has grown into black metal, and from that into a more eclectic take on the genre. It’s this eclecticism which makes Rotting Christ into what is easily one of the more interesting bands in the genre these days. The last few albums by the band have seen them move gradually into a more melodical, mystical sound, with 2010’s Æalo getting about as far from the black metal roots as you would think the band could get, especially with the haunting Diamanda Galás cover Orders from the Dead rounding that one up. Turns out we were all wrong, as Κατά Τον Δαίμονα Εαυτού is probably the most eclectic album the band has released to this date.

Perhaps it’s only appropriate that Κατά Τον Δαίμονα Εαυτού delivers an entirely different take on the roaring black metal the band used to be famous for, as the title roughly translates as Do What Thou Wilt, a quote by the British writer and mystic Aleister Crowley, who stood at the cradle of the Thelemic religion in the twentieth century. Rotting Christ have always chosen their own path, trends or criticism be damned, and Κατά Τον Δαίμονα Εαυτού is no exception to that particular rule. The album sounds like a logical culmination of all the lessons learned and experiments the band has undertaken over their long career, and might very well be the best Rotting Christ album to date, of course depending on whether you’re a black metal purist or not.

The album kicks off in familiar fashion with the pounding In Yumen-Xibalba, which presents the band at its hypnotic, droning best. It’s a signature track for the band, almost in the comical way that all Status Quo songs sound just about the same. It has your pounding drums, your hypnotic twin guitar riff, and Sakis screaming from the top of his lungs. It’s a more than decent opener for the album, but the song in itself is so typical it become unremarkable. Luckily, things get more interesting from P’unchaw Kachun – Tuta Kachun onward, with its underworldly, almost Gregorian humming and chanting, and its partial Quechuan lyrics. It’s from here on that Κατά Τον Δαίμονα Εαυτού truly becomes interesting. P’unchaw Kachun – Tuta Kachun’s occultist choirs flow seamlessly into Grandis Spiritus Diavolos, another more simple but effective metal tune, with both Sakis’ signature screams and clean background vocals. The first half of the record is rounded up by the fast title song, with its interesting use of horns, and the decidedly folky Cine Iubeşte Şi Lasă, featuring women’s vocals and men’s choirs. Rotting Christ have never been so far from their black metal roots, and they definitely sound the better for it here.

The second half of the album is an altogether more traditional one. Where the first half of Κατά Τον Δαίμονα Εαυτού both sonically and lyrically transports you all over the world, the second half never strays far from home and the black metal sound the band has become known for in all these years. Both Iwa Voodoo and Gilgemes are blazing black metal songs without all the window dressing which mark the first few songs on the album. Русалка, however, sung almost entirely in Russian, sounds appropriately grand, with its clever use of bombastic yet never overbearing keyboards and features an interesting guitar solo near the end. With Ahura Mazdā-Aŋra Mainiuu, the band brings us to Swahili with a sweeping black metal track, before ending the album with the very dark and brooding Χ Ξ Σ. The vinyl version of the album, as well as the limited edition on cd feature the bonus track Welcome to Hel as well.

Rotting Christ stray further than ever from their signature black metal sound on Κατά Τον Δαίμονα Εαυτού, and deliver a truly interesting and varied album, which I would reward with the highest possible marks were we to work with a grading system (which, luckily, we’re not), and cannot recommend it enough. There will be complaining by your typical black metal elitist, but there will always be complaining, whether the band veers left or right. Any band, for that matter. Κατά Τον Δαίμονα Εαυτού will both be showered with effusive praise or heart-filled loathing, depending on who you talk to. I’m guessing it doesn’t matter one bit for the Tolis brothers, who keep doing their own thing whilst they continue exploring the boundaries of the metal world. Do what thou wilt, indeed.