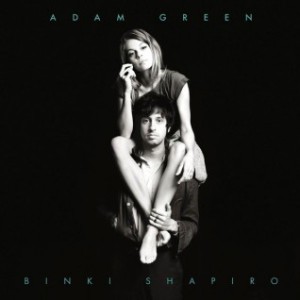 New York impudence interweaved with warmth from California, it seems like a mad idea, but at the same time it’s interesting enough to be worth an experiment. For this reason Adam Green and Binki Shapiro could be a solid duo. Because what’s not to love about Moldy Peach Adam Green? It can be safely stated that Green clearly demonstrated his dexterity throughout the years with an impressive track record of solo albums on which he regularly sings about ambiguous and unambiguous obscenities. And what’s not to love about the multi-talented Binki Shapiro? For many, her almost angelic voice combined with a more than acceptable appearance is an instant jaw dropper. One might know Shapiro from the band Little Joy, a one-time collaboration with Strokes drummer Fabrizio Moretti and Los Hermanos’ lead-singer Rodrigo Amarante. Although much about Little Joy is swift, they did manage to create a laidback and highly listenable record that is best played during those sultry summer sundowns. One thing became clear on the Little Joy album (2008), Shapiro’s drowsy and sweet voice flourishes within the context of a vintage jukebox sound. After some side-projects with Megapuss and Beck she met Adam Green with who she wrote various songs about breakups, ultimately leading to this self-titled album.

With Green she continues to push forward her fondness for charming sixties pop music. And this is not without risk. The tracks ‘Here I Am‘ and ‘Just To Make Me Feel Good‘ balance on the thin line between freshness and decentness leaving Green mostly supporting Shapiro. Interestingly enough, the album becomes more appealing during the swaying third track which is a solo effort by Shapiro. On ‘Casanova‘ she refers to a ‘Casanova to the mentally ill’, which will subsequently make you think of earlier work of Green. Same goes for ‘Pity Lover‘ that is followed by another solo of Shapiro. She elaborates about getting the attention of an older man: ‘And I’m younger than you are? You’ll see. You’re just like me in fast forward. Not a day too soon. I may be a baby, but not forever. I’ll do anything, don’t you want me to?’ Well, that’s pretty whacky. Anyway, whilst lyrically incisive, Green’s baritone voice does not seem to fit the duets with Shapiro. Mostly he just gallantly sings along. ‘What’s The Reward‘, which is heavily influenced by surf rock, is the only exception. By the constantly changing pace of the instrumentation the light voice of Shapiro and the robust voice of Green are separated from each other, thus constructing a lively duet.

Derived from broken relationships Green and Shapiro deliver a pleasant and warm album that feels a bit off balance. Adam Green does not play the part of an antagonist, which would be the easy solution. Instead he allows Shapiro to be in the spotlights and consequently falls back into a state of decentness. I’d be lying if I said I didn’t miss the distinct and open nature of Green. On the other hand some cynical texts are still to be heard. As for Binki Shapiro, she seizes this opportunity with both hands and shows off her capabilities leaving me with a longing for more. To my knowledge Adam Green and Binki Shapiro are not involved in any romantic way. After hearing the record it does seem logical for both to fall into each other’s arms. Although vocally spoken one may doubt if this match was made in heaven.